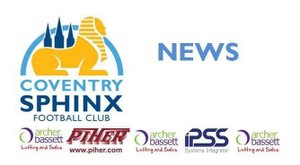 Coventry Sphinx FC are sad to hear of the death of former Chairman David Kite.

David was involved in local non-league football for over 50 years in a number of ways including being a member of Charity Cup Committees.

Current Chairman Dannie Cahill commented, "David was the Chairman when we were called Sphinx FC and he was the one who renamed the club Coventry Sphinx FC.
I was lucky to meet David on a number of occasions over the years and he was a true gentleman.

Our Honorary Vice President Joey Fletcher played as the club under David's Chairmanship and had the utmost respect for him.

Our sincere condolences go out to his family and friends at this sad time.