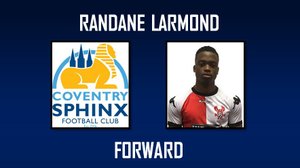 Manager Lee Knibbs has moved to freshen up his forward options with the recruitment of young striker Randane Larmond. The forward joins from Redditch Utd and has already taken a place in the Coventry Sphinx first team match day squad.
Randane enjoyed cup success with the Kidderminster Harriers Youth team in 2015 and later moved on to Redditch Utd. He made his Redditch first team debut last season and now joins up with Coventry Sphinx to continue his football career.
On Saturday he had a run out with the Sphinx Reserves and he immediately impressed with a first half hat-trick. He capped off his highly encouraging display with a late bullet header to take his match tally to four goals on his competitive debut for a Sphinx team. Randane is an exciting prospect and we wish him the best of luck during his time at Coventry Sphinx.
Share via
FacebookTwitter
https://www.pitchero.com/clubs
Recent news