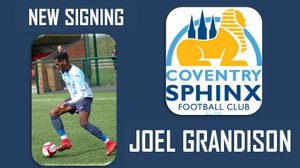 Forward back at Sphinx

It is with great pleasure that we announce the return of popular forward Joel Grandison to Coventry Sphinx. Joel had a successful spell with the club last season and we have now secured his services again.

Joel had an instant impact when he joined us last season with a goal on his debut helping us to victory and his return will immediately strengthen our attacking options as we head into a busy spell of fixtures. He is a former Coventry City Youth player and he can count Callum Wilson among his former team mates at the Sky Blues. Former clubs include Solihull Moors, Coleshill Town, Bedworth and Corby Town and he now returns for his second spell at Coventry Sphinx.

The recruitment of a player of the quality of Joel Grandison should demonstrate that we are always actively looking to improve our squad and we look forward to seeing Joel back in the sky blue and white shirt of Coventry Sphinx.