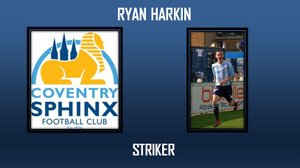 At the end of last season Ryan Harkin got the opportunity to step up two levels by joining Nuneaton Borough. His performances for Coventry Sphinx over the last three seasons more than warranted the opportunity for him.
Ryan netted 69 goals during his three year spell at Coventry Sphinx and that included a Golden Boot winning season in the 2017/18 campaign. Ryan unfortunately picked up an injury in pre-season and he now returns to Coventry Sphinx on a dual registration basis in order to fine tune his fitness.
Share via
FacebookTwitter
https://www.pitchero.com/clubs
Recent news