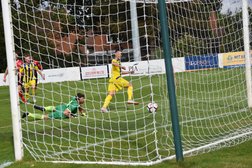 Last weekend couldn’t have gone any worse for Coventry Sphinx with a heavy defeat at Newark the end result. Losing 8-1 gives people plenty to think about and the manager was one of those with six changes made from the team that was beaten last weekend. The changes in personnel produced the required response and Sphinx reminded everyone what they are all about with a hard earned away win in Wolverhampton. Lawrence Rawlings was the man to take the headlines with his first half strike winning the match.
Only keeper Tom Cross, full backs McConnachie and Tufan, defender Albrighton and wide man Rawlings kept their places as the team was shaken up to take on Wulfrunians. Returning to the team were key players Louis Guest and Liam Kay who immediately added leadership to the Sphinx team. Lewis Noon returned to the midfield and Max Howard made a return alongside him. The front places went to Randane Larmond, who has waited patiently for his first start and Charlie Faulkner also returned for his first start after a significant spell out with injury.

Sphinx showed their intent straight from the kick off with Faulkner and Larmond combining to immediately create the first chance of the match. Faulkner’s tenacity released Larmond who took the direct route to goal with only his shot letting him down in the opening seconds. The next chance for Sphinx went to Faulkner who steered a Noon free kick wide of the near post but Sphinx were soon in front regardless. Albrighton sent a free kick into the Wulfrunians box which was only headed away as far as a lurking Noon. He exchanged passes before lofting in an inch perfect ball to pick out the intelligent run of Rawlings who took a touch to take it round the exposed keeper and slot into an empty net. A well worked goal to get Sphinx off to an ideal start and establish a lead in the 12th minute. Another good passage of play started and ended with right back Patsun Tufan who was disappointed with not getting his header on target after surging into the box. Wulfrunians were getting their fair share of the ball but Sphinx were solid defensively and when Wulfrunians did get a shot away, Cross was there to deal with it. Sphinx then had a glorious chance to extend their lead with a counter attack triggered by a pass out of defence by McConnachie to Kay who moved it out to the left before the ball came inside to Noon. Noon then drove forward to release Larmond who rounded the keeper but couldn’t keep his balance to finish off a beautiful move that started in the Sphinx penalty area. The quality of the Sphinx pressing then created a great chance with Rawlings dispossessing the defender high up the pitch which led to a simple pass to Faulkner who couldn’t get a clean connection on his shot when superbly placed to score. Another chance followed with an excellent through ball from Guest sending Rawlings through on goal but he was left disappointed by the keepers save. Wulfrunians best chance came just before the break with McConnachie atoning for his error with a goal line clearance.
HALF TIME: AFC WULFRUNIANS 0-1 COVENTRY SPHINX

Sphinx will feel they had earned their half time lead and they would have been also hoping not to regret putting away one or their other clear chances they had to score. Wulfrunians came out looking to be more patient in possession and it was helping them have more of the game. Sphinx continued to look for that all important second goal, while maintaining their defensive shape. The team had played well and that was highlighted by Lee Knibbs waiting until the 75th minute before replacing the tiring Faulkner with Iyseden Christie. As we entered the last ten minutes, defensive midfielder Jack Challis was introduced to replace the forward Larmond and that was a clear indication of how Sphinx intended to approach the last ten minutes. Late on, the hosts had a marvellous chance to take a point after a Mark Albrighton tackle resulted in a penalty. After a painfully long wait for the spot kick to be taken, Tom Cross went the right way and produced a magnificent save to beat away the effort and preserve the Sphinx lead. The tactical changes were effective and after four minutes of added time Sphinx could celebrate a hard fought away win. A magnificent response to their last outing a week ago and full credit must go the players and management team for that.

MAN OF THE MATCH: RANDANE LARMOND
The performance of the team was the key today with every single player contributing all over the pitch. The defence benefited with the return of Guest and Tufan returning to a full back role. Noon dictated the play in the midfield and Kay oozed authority alongside him. Rawlings was a persistent threat from his wide position and got the winning goal. Howard made the left sided area solid and got forward when the opportunity arose. The two forwards were excellent today and all that was missing from their games was a goal that their performances had earned. Faulkner was buzzing around and never gave the defence a moment’s peace but Larmond takes the plaudits today with a highly encouraging display on his first start for the club. Larmond gave us a physical, aerial presence and also displayed pace and desire in abundance which he utilised both offensively and defensively.