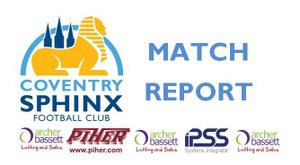 A point apiece for Sphinx and Stourport

Midland Football League Premier Division
Coventry Sphinx 1-1 Stourport Swifts
The two sides controlled a half each and a point each was a fair outcome in the end. It was a good response from Sphinx who had suffered defeat on the road last time out. Sphinx will look back on the game with some frustration after their first half performance failed to put the game to bed when it really should have. Stourport showed good character to get back into the game and got the point their second half showing had earned.
Changes were made to the Sphinx line up with Callum Maspers coming in on the right of defence to replace the injured George Whitelaw. Liam Kay also replaced the injured Mark Albrighton in the heart of defence and Patsun Tufan returned to the side in place of Max Howard at left back. Lewis Noon came into the midfield and Ryan Harkin made a surprise return to Sphinx after a loan was agreed with Nuneaton Borough.
Sphinx got on the attack quickly and Ryan Harkin was the first get a shot away. A positive run from Rawlings then released Christie into the box but the shot lacked sufficient power to trouble the keeper. Rawlings then burst through into the box himself only to see the keeper block his powerful shot. The bright start from Sphinx continued and that was confirmed with the opening goal that started with Kay pinching the ball on the half way line. That then sent Bilic scampering forward who squared it to Woodward who clipped a fine pass to Harkin on the left. Woodward continued his run to collect the ball back from Harkin and he swung a cross in that fell for Rawlings who thumped a shot against the bar. BILIC was on hand to make an awkward finish look relatively simple and give Sphinx a deserved lead after 19 minutes. Harkin then had another opportunity but his left foot effort was saved by the feet of the Stourport keeper. The ball came back to Harkin but again the keeper was equal to his strike. The Stourport reply was almost instant with their first significant chance equalising for the visitors. The goal came from a Sphinx free kick that was comfortable headed clear and set Stourport away on the counter attack. Two accurate passes were enough to leave Peters with a simple finish at the far post. That equaliser was an escape for Stourport who had been second best to that point but Sphinx could only have themselves to blame for not taking more of their excellent chances. Lewis Noon then fell to injury and a substitution and a slight reshuffle followed for Sphinx. Chances continued and Sphinx headed just over the bar from a free kick as they looked to retake the lead. Sphinx thumped the post just before the break but they had to be content with going into half time at 1-1.
A dominant Sphinx performance in the first half turned around in the second half with Stourport taking the initiative. Stourport took their turn to hit the best as they started the second half far better. Cross was then forced into a fine save with his legs before he made a regulation save to prevent Stourport going in front. Harkin again forced a save as Sphinx responded but Rawlings could only shoot wide from the rebound. Chances followed for both sides but neither could find the winning goal in an entertaining match at the Ryona Engineering Supplies Stadium.
The first half belonged to Sphinx, the second half belonged to Stourport. A point each was the result and Sphinx now prepare for their Preliminary Round FA Cup at Northern Premier League side Mickleover Sports on Friday night.
COVENTRY SPHINX TEAM: CROSS, MASPERS, TUFAN (Pearson 83 mins), BILIC, KAY, GUEST, RAWLINGS, WOODWARD ©, CHRISTIE (Palmer 87 mins), NOON (Howard 27 mins), HARKIN
Unused Subs: Caputo and Kavanagh

MAN OF THE MATCH: LAWRENCE RAWLINGS
Lewis Noon was a key player in the attacking play of Sphinx before his evening was cut short by injury. Loz Rawlings was the man who caught my eye with his efforts leading to him being the most consistent attacking threat for Sphinx.