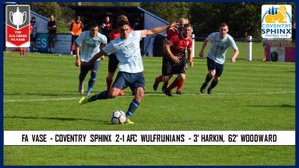 Sphinx were overdue an FA Vase win and they were handed another tough tie with fellow Midland League Premier Division side AFC Wulfrunians standing in their way of a place in the next round. Sphinx are made of stern stuff and they had to show their character to overcome a good Wulfrunians side. Goals from Harkin and Woodward were enough to send them through to the next round and set up a tie against Hanley Town.
Right back George Whitelaw was unavailable so a slight adjustment in defence was required and Ryan Harkin returned to the side up front alongside Iyseden Christie. It was the returning Harkin who set Sphinx on their way with just a few minutes on the clock. Iyseden Christie was fouled on the Sphinx right and Woodward delivered the free kick which was headed clear. Woodward reacted quickly to collect the loose ball and fire it into the feet of Harkin in the penalty area. HARKIN turned, proceeded to tie two defenders in knots and drilled his finish into the far corner to open the scoring. Wulfrunians responded well and they had a number of opportunities with the closest being a shot that rattled the cross bar. Sphinx continued to create chances of their own and Rawlings was inches away from latching onto a through ball from Woodward. It was Rawlings who threatened again with a quick thinking Harkin releasing him from a quickly taken free kick but the keeper was quick to smother the chance. It was fair to say that Wulfrunians were having the advantage with possession but they didn’t make it count until late in the first half after Sphinx had been temporarily reduced to ten men after Captain Woodward was sinbinned. Wulfrunians went on to win a free kick centrally on the edge of the box and Courtney Richards expertly dispatched it beyond Cross to equalise for the visitors.
The second half began with a reinvigorated Wulfrunians looking to go in front with former Sphinx striker Chris Sterling looking a threat. It was then to be Wulfrunians turn to suffer the one man disadvantage thanks to the new sinbin law and Sphinx took their opportunity to retake the lead. Patsun Tufan had got forward from right back which led to Woodward swinging a cross into the box. Bilic, who was now in a midfield role, ended up on the floor and the referee immediately pointed the spot. WOODWARD stepped up for penalty duties and he drilled it into the corner to secure a 2-1 lead. Striker Sean Kavanagh was introduced after the goal in a positive substitution and his presence started to see Sphinx create more chances. Kavanagh was agonisingly close to getting on the end of a low cross and he was interacting well with Harkin and Rawlings. Sphinx then had a moment of fortune with the referee awarding a penalty to Wulfrunians before he realised the offside flag was up. Wulfrunians continued to threaten and Sphinx continued to look for the killer third goal but no further goals would come and it was Sphinx who would progress to the next round of the FA Vase in a close contest.
That result means Sphinx remain unbeaten at home as we end the August fixtures. The next round of the FA Vase takes place on Saturday 14th September and Sphinx will be at home to Hanley Town who will make the trip from Stoke-On-Trent. The next league fixture will be on Saturday 7th September when Sphinx travel to Derbyshire to take on in form South Normanton. There is a big game taking place at the Ryona Engineering Supplies Stadium on Thursday when Coventry Sphinx Youth take on Newcastle Town Youth in the FA Youth Cup. It’s just £3 admission and your support will be greatly appreciated.
COVENTRY SPHINX TEAM: CROSS, TUFAN, BILIC, KAY, GUEST, ALBRIGHTON, RAWLINGS, WOODWARD ©, CHRISTIE (Kavanagh 64 mins), HARKIN, BILLING (Howard 56 mins)
Unused Subs: O’Connor, Palmer, Larmond, Maspers, Whitmore

MAN OF THE MATCH: PATSUN TUFAN
Everyone had to work hard to secure the result and there were plenty of contenders for Man of the Match. Ryan Harkin buzzed around and got Sphinx off to a perfect start. Skipper Woodward led his side with enthusiasm and scored the winner from the spot. Rawlings gave us a typical Rawlings display with his energy continuing to impress. Albrighton has been a rock at the back since his arrival and has formed a good partnership with Louis Guest. Keeper Cross had a solid game but it’s the two Sphinx full backs I’m going to highlight. Midfielder Bilic dropped into left back and had an excellent game defensively and offensively. He moved into the Sphinx midfield in the second half and gave us something different in there too when we needed it. However, my Man of the Match goes to Patsun Tufan. Another different position for Patsun but he took it in his stride again. Defensively tough to beat and he was forced to work hard all game with Wulfrunians looking to attack from wide areas. He was composed on the ball and his distribution was consistently good.