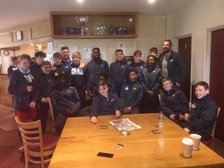 Sphinx U14s have eyes set on a treble

Kev Demulder and Luke Hopkins have led their Coventry Sphinx Under 14s (White) team to a League and Cup double this season and they’ll be aiming to make that a treble in the coming weeks with the League Cup Final still to come.

The Bedworth Nursing Cup was the first trophy to make its way back to Sphinx Drive and they have recently added the Coventry & Warwickshire Youth League Under 14s A League title to their trophy collection. That’s now the third consecutive year the team have won their league.

The League Cup final awaits on Sunday 12th May at 1pm when Coventry Sphinx will meet the League runners up Alvis at the Bedworth Oval.

Goals have come from a number of players throughout the Coventry Sphinx squad with Noel Angafor leading the way with 26 goals in his 22 appearances. Ashton Demulder and Merdi Mukaba are hot on his heels with 22 goals in as many games. Temi Tayo Oke also has an impressive strike rate of 16 goals in 18 games and he is closely followed by Caleb Espoire Mayuka with 14 goals in 22 matches.

The squad built and developed by Kev Demulder and Luke Hopkins are certainly doing the club proud and we wish them the best of luck in their League Cup Final in May.