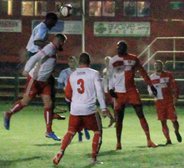 Sphinx pegged back in the fog

Gresley 3-3 Coventry Sphinx
Report by Martin Sutton.
Sphinx took a useful away point in Derbyshire on Tuesday night but they finished the game disappointed not to have retained a two goal lead. The game survived the recent wet weather but fog soon became an issue in the second half as Gresley staged a comeback. A Lewis Noon free kick and a Joel Grandison double had given Sphinx a 3-1 lead at half time but Gresley fought back to take a point in a thrilling game at The Moat.
Senior defenders Liam Kay and Louis Guest returned in defence and Charlie McConnachie replaced Charlie Faulkner out wide. Inside the first minute Sphinx had the chance to go ahead after the award of a free kick just outside the Gresley penalty area and Lewis NOON stepped up to fire the ball up and over the wall and beyond the Gresley keeper to get Sphinx off to a perfect start. Sphinx barely had time to celebrate before Gresley levelled in the 5th minute. The next goal went to Sphinx with Rawlings and Woodward combining before leaving Grandison to finish. Rawlings picked out Woodward on the left who did well to deliver a cross on his left. The rest was down to GRANDISON who won the initial header before pouncing on the loose ball to poke the ball home. Gresley had plenty of attacking intent in their play and Sphinx would have been content to go into the break with a one goal advantage. Joel Grandison had other ideas and in first half injury time he came up with an audacious finish to extend the Sphinx lead. The goal started with a long punt up field from keeper Cross and although Grandison didn’t win the high ball, he done enough to allow the ball to break to Rawlings. Rawlings fed the overlapping Woodward who was quick to send in a low left wing cross. Grandison battled for the ball on the edge of the six yard box and with the ball squirming away from him and his back to goal the chance appeared to have gone but GRANDISON showed tremendous awareness to produce an outrageous back heeled finish into the bottom corner.
The second half began with Sphinx playing up the hill and as the fog descended, Gresley worked their way into a spell of dominance. They were rewarded with a goal back just after the hour mark with a well taken header giving them more encouragement. In the 74th minute Gresley got their equaliser which I believe was a shot from near the edge of box but I could be wrong as the fog was getting the better of me at this point! Gresley continued to attack and Sphinx were looking for the winner themselves with the positive substitutions of strikers Colin Smith and Lewis Chester bringing a new threat to the Gresley goal. Sphinx had chances and Gresley had chances but neither side could find the winner. The first half belonged to Sphinx and Gresley took the second half honours so a point apiece was the reward for both sides who produced an entertaining contest.
In the last three games Sphinx have scored three goals on every occasion and gained a seven point haul which has lifted them to 14th in the division. They still have plenty of games in hand on many above them so their sights are firmly set upwards. They are due to travel to Highgate Utd on Saturday before hosting Coventry Utd on Boxing Day at 1pm.

MAN OF THE MATCH: JOEL GRANDISON
Liam Cairns is steadily getting back to his best in the Sphinx midfield and was again prominent in the heart of midfield. Patsun Tufan has been as consistent as they come all season and it was no different on this occasion. Charlie McConnachie caused problems with his pace and Callum Woodward seemed to thrive in his more advanced role. Lewis Noon is really getting into form and he again showed his capabilities from dead ball situations. Goals are what the game is all about and Joel Grandison produced a brace. One goal was all about desire and the second was all about awareness and skill and he is todays Man of the Match.