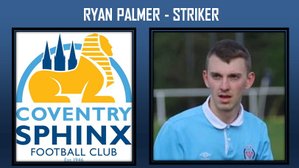 The squad continues to build at Sphinx Drive and we can confirm that young striker Ryan Palmer has committed to Coventry Sphinx ahead of the new season. Palmer scored 15 goals in 26 appearances for Coventry Alvis last season and now makes the step up to Coventry Sphinx.
Ryan has played MFL Premier Division football before with a spell at Coventry Utd. His goal scoring in under 21 football gave him a ratio of a goal a game and he took that scoring into men’s football at Coventry Alvis last season. Lee Knibbs now gives him the opportunity to establish himself at a higher level.
Welcome to the club Ryan!
Share via
FacebookTwitter
https://www.pitchero.com/clubs
Recent news