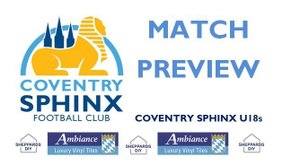 Under 18s close season on Thursday

Dave Bull’s Coventry Sphinx Under 18s bring the curtain down on an excellent season with a home fixture against Leicester Road. The Youth team have provided goals, entertainment and fresh faces for Lee Knibbs’ first team squad throughout the season and Thursdays match provides the supporters with the perfect opportunity to show their appreciation for their efforts this season.
Dan Kelly leads the way in the goal scoring stakes with his 35 goals in 24 games putting him clear at the top of the goal scoring charts. T’ahje Smith has an equally impressive ratio with 20 goals in 14 appearances. Attacking midfielders Alex Pearson and Owen Gorman have contributed superbly with Pearson on 13 goals for the season and Gorman chipping in with 8 goals from 18 appearances. Goalkeeper Kieran Hart continues his development and is the only player to play every single youth team game this season.
The first team have benefitted from the strength of the Under 18s this season with six Youth team players making the match day squad for the first team. Callum Maspers, Callum Mack, Alex Pearson and Dan Kelly have all made starts for the first team. T’ahje Smith has a substitute appearance and Danny Bull has also made a number of squads. In addition, Dan Kelly and Alex Pearson have both scored their first senior goals.
Leicester Road come to Sphinx Drive in good form with third place in the league firmly in their sights. Sphinx won the Leicester Road Stadium fixture with Under 16s striker Mo Billy in fine form that night. Let’s make every effort to come along to this fixture and give the lads another good crowd to cap off a fine season.
Thursday 11th April, 7.45pm
Midland Floodlit Youth League Eastern Division
Coventry Sphinx U18s v Leicester Road U18s
VENUE: Sphinx Drive, Coventry, CV3 1WA
ADMISSION: Adult £3, U16s free.