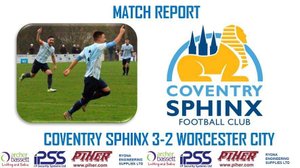 Coventry Sphinx 3-2 Worcester City
Report by Martin Sutton.
Since the last game, Sphinx had seen the resignation of their manager and changes to the squad. They then faced an in form Worcester City whom they had never beaten at home. They had senior players missing and two 16 year olds in the starting line up. The odds were heavily stacked against them before the match but they proved that attitude, graft and spirit will always give you a great chance. The performance delivered exactly that and they got the points their endeavour deserved.
An early morning pitch inspection was necessary after the exceptional rain in recent weeks. A fully qualified official passed the pitch fit to play, in liaison with the Match Referee, and we were all set to welcome Worcester City. This was the first match in charge for assistant managers John Woodward and Shaun Thomas and they named a brave line up that had positivity written all over it. Notable absentees were Club Captain Liam Kay, Captain Callum Woodward and Vice-captain Louis Guest who were unavailable. Full back Charlie McConnachie was also absent. In came recent signing Joel Grandison who had performed well for Sphinx last season. He was joined up front by Youth team striker Mo Billy who was making his first start for the club. The defence welcomed former Coventry City man Reece Ford who has joined on loan from Barwell.
If there were any doubts on the Sphinx mentality, they were soon removed with Captain Liam Cairns seeing yellow for a foul in the opening minutes. Sphinx were eager to start with a high tempo and an aggressive press which was bringing them some joy but they were caught out after 15 minutes to fall behind. An accurate pass out of midfield sent Brain scampering away from the Sphinx defence. Keeper Cross confronted him but Brain did well to round him and pick out a finish despite the presence of Tufan on the goal line. That was a setback for Sphinx after a promising start and now we wold find out what they were really made of. Just half an hour later, Sphinx were 3-1 up which comprehensively answered that question. Ten minutes after going behind, Sphinx were level. A set piece on the left was delivered by Lewis Noon and Scott HAMMOND attacked the excellent ball to fire in a header that went in off the underside of the cross bar. Six minutes later Sphinx were in front from an identical set piece situation. Noon again provided the quality from a high quality delivery and Lawrence Rawlings attacked the near post to flick it goalwards with his head into a dangerous area. Another touch was enough to beat the exposed keeper and Charlie FAULKNER was the man to claim the goal. A swift turnaround for Sphinx had put them in front and they emphasised their comeback with a third goal on the stroke of half time. Noon swung in a right wing corner and Mo Billy showed good strength to attack the ball and then poke it into the path of Charlie FAULKNER who had the gleeful task of thumping it home from close range. A tremendous response from Sphinx had given them a 3-1 advantage at the break.
A Worcester response was expected in the second half and although they had the majority of the possession and territory, they failed to consistently create meaningful chances and test the Sphinx keeper. Sphinx were happy to defend and counter attack and the main attacking plan from Worcester was to deliver the ball into the box from all angles. The Sphinx rear guard stood firm but Worcester managed to get a goal back on 57 minutes through Adaggio. The mental edge could have gone Worcester’s way after that goal but Sphinx were having none of it. Sphinx maintained their work rate and their game plan and saw out the game to take a much needed three points. This match was about more than the points though. The performance of the players was reinvigorating and if they can take that into forthcoming fixtures then a rise up the table will surely follow.
Assistant Managers John Woodward and Shaun Thomas are currently at the helm and Shaun Thomas told us: “It has been a busy few days and we were pleased to be able to fully focus on a football match today. I thought we were fantastic in the first half and good value for the lead. In the second half the whole team dug in for each other in difficult conditions and we managed the game well. We now look forward and we will be working hard in training to ensure we are fully prepared for our next fixture.”
Sphinx are on their travels on Saturday with a trip to Gresley.

MAN OF THE MATCH: CHARLIE FAULKNER
A really tough call to make when the team performed with such spirit. Not a single player was carried. Youngsters Jamie Draper and Mo Billy came of age in this match and proved themselves worthy of their places. Patsun Tufan was exceptional at centre back alongside loan signing Reece Ford. Liam Cairns led the team today and he was a fine example to follow. Lewis Noon never stopped working and provided the assist for all three goals. Grandison played his first match of the season and he grafted hard alongside Mo Billy up front who was making his first start for the first team. Cross was loud and clear in his goal, assisting the defence really well and Scott Hammond netted his first goal for the club in an impressive performance. Wide men Rawlings and Faulkner worked their socks off and provided a threat too. Faulkner takes the plaudits with his goals and his willingness to adapt to an unfamiliar position for the team.