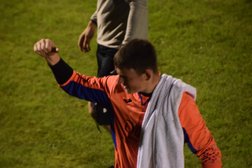 Kidderminster Harriers Youth 0-1 Coventry Sphinx Youth
Report by Martin Sutton.
A Monday night league match in the heart of Smethwick for the Sphinx Youth team and they returned with three hard earned points after a battling display against Kidderminster Harriers. They cast injury and suspension issues aside to battle their way to victory that was secured by a fine Mo Billy finish in the first half.
Suspensions to key midfielders Harvey Billing and Zach Tellyn in addition to an injury to forward David Obeng gave opportunities to other players tonight and they didn’t let us down. The referee only gave permission for the match to go ahead just minutes before kick off after he was satisfied an area of concern in the centre of the pitch had been addressed. Kidderminster got the first big chance to get the crucial opening goal after the award of a penalty. Jude O’Connor takes some beating from the penalty spot and he produced a fine save and followed that up with another stop to keep out the rebound. Magnificent stuff from the young shot stopper and Sphinx took full advantage by taking the lead themselves just after the half hour mark. Dan Kelly once again combined superbly with Mo Billy to send him through on goal and BILLY showed his composure to finish well past the keeper and give Sphinx the lead. Shortly before half time, Sphinx Captain Jamie Draper was replaced in defence and at half time Archie Ascroft had to be replaced to add to the injury woes affecting the Sphinx Youngsters.
The second half started with five regulars now out of the game but Sphinx had a lead to defend and they went about it with their usual vigour. Chances were flowing for both sides but both keepers were in fine form to keep the score unchanged. Dan Kelly made some very intelligent runs and on another night would have scored a couple but he found the Kidderminster keeper in excellent form. Sphinx keeper Jude O’Connor was also excelling as he engaged in a battle with his opposite number for the Man of the Match. A nervous five minutes of injury time made sure Sphinx had to work hard right up to the final whistle but they kept their clean sheet and as result opened up a two point lead at the top of the Midland Floodlit Youth League Northern Premier Division.
The Sphinx management were clearly delighted with the application and desire of their players after a tough contest. To produce a 1-0 away win in the circumstances was a magnificent effort from the boys and their reward was to go top of the league once again.
COVENTRY SPHINX TEAM: O’Connor, Kavanagh, Whitehouse, Burke, Draper ©, Welch, Convery, Morris, Kelly, Ascroft, Billy
SUBS: Rose, Archer, Ward

MAN OF THE MATCH: JUDE O’CONNOR
Mo Billy was the match winner and he was a handful all night. His strength was evident and he combined that with pace and a tremendous work ethic. Dan Kelly makes a good partner for Billy and he was provider tonight. My Man of the Match goes to keeper Jude O’Connor who made a crucial double save from a penalty before Sphinx got the winning goal. He went on to keep a clean sheet and made a number of impressive saves.