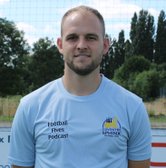 Sphinx Settle For a Point

The opening day thrashing of Brocton was still fresh in the mind but Sphinx now had to build on that with a result away from home.

They did just that with a well earned point which could well have been all three on another day. They returned to Coventry unbeaten in the league with a home match against Tividale on Monday night to look forward to.

Wednesday night was the first away match of the season for Coventry Sphinx and Leicestershire side Quorn was the destination. Sphinx were involved in a thrilling match here last season when they grabbed an injury time goal to emerge 4-3 winners. That match was in March and the overhaul of the Sphinx squad in the summer is indicated by the fact that today only Mitch Thomson featured in both starting line ups for Sphinx. Having said that, manager Stuart Dutton only made one enforced change from Saturday’s win against Brocton with Reece Blackmore coming in for the unavailable Anton Astley at Left Back.

Blackmore was soon involved with an excellent diagonal pass to Barnett who had made a run into the centre forward position which resulted in a free kick for Sphinx in a dangerous area. Mitch Thomson was full of confidence after his four goal blast against Brocton and he stepped up to shoot but his effort didn’t trouble the Quorn keeper as the dip on the effort came just too late. The first significant chance also came to Quorn via a set piece with the Sphinx defence blocking the first shot from the free kick before Dutton saved the follow up effort really well at the foot of the post. It was a balanced game with chances few and far between but Sphinx were looking comfortable in defence without really threatening the Quorn goal often enough. Just before half time Danny Harris burst into life in his new role behind the striker. He produced a mazy run and his cross shot just evaded his team mates and the far post in equal measure. Half time and the scores were still level but Sphinx would have been more than satisfied with their performance so far.

We were just six minutes into the half when Sphinx took the lead with a goal of real class. Thomson and Harris exchanged passes in a central area before HARRIS hit an unstoppable effort into the back of the net. A lovely bit of football finished with a tremendous strike to give Sphinx the lead in the 51st minute. Quorn were full of effort but they couldn’t test Dutton in the Sphinx goal and that was due to the defensive play of Sphinx rather than Quorn’s inadequacies. Stuart Dutton made his first change just after the hour with Dayle Kenny replacing Dan Douse. “Dutts” has some really good attacking options on the bench and this time he choose Kenny to freshen up his front line. Within a minute of coming on, Kenny was running at the heart of the Quorn defence and only a foul stopped him as he approached the penalty area. This was Thomson range but again his effort was just over the bar. Harris and Thomson continued to link up well and the next Sphinx chance came from a swift counter attack that culminated in a cross field pass from Harris to Thomson who hit his drive wide of the target. Twenty minutes to go now and a big moment arrived as a Quorn effort was cleared off the line. Some of the Quorn team stopped to celebrate unaware the referee hadn’t given a goal and Sphinx broke away and almost doubled their lead in the process. Quorn felt aggrieved and it was a trigger for them to up their game. Dutts responded by replacing Harris with Johnston to put more steel into his midfield. Shortly after, and with just 9 minutes left on the clock, Quorn managed to find an equaliser as a free kick found it’s way into the net. Difficult to say whether a Quorn or Sphinx player got the crucial touch but it was a goal all the same. Sphinx still looked well capable of winning the game and they had one more chance as Johnston won a header and Cairns then fed Thomson who saw his long range strike saved. Time was running out and Sphinx were forced to settle for a point in a game that they had looked comfortable in for long periods. A good away performance and after the way they played I’m sure Sphinx will be disappointed not to have taken all three points.

MAN OF THE MATCH: Darren Eggleton

A number of players were contenders in my eyes and a key part of the Sphinx performance were the central midfield pair of Webb and Cairns. They both competed strongly and their positional awareness allowed the full backs to get forward. The defence looked very solid tonight when the midfield was breeched and the stand out performer for me was Daz Eggleton at centre back. His partner Kieran McCalla ran him close but “Eggy” was my Man of the Match.