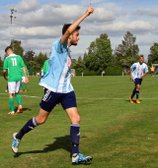 Sphinx produced an incredible display of finishing to get their league campaign underway in style against a shell shocked Brocton side at Sphinx Drive.

Mitch Thomson takes the headlines with four goals in the first hour but it was a team performance to be proud of today.

Gaffer Stuart Dutton made just three changes from the FA Cup tie against Highgate with Greg Webb and Liam Cairns coming into midfield and Douse starting on the left. The bench looked strong with three strikers all waiting for their chance today.

We had hardly had a chance to take up our positions before Sphinx had taken the lead as Brocton were caught cold from the kick off. It took just 20 seconds for debutant Daniel DOUSE to bag his first Sphinx goal after Sphinx had kicked off and worked the ball through the Brocton team to give Douse the opportunity. The best possible start for Sphinx and they doubled their lead on 7 minutes with a sublime free kick from Mitch Thomson. Danny Harris had been fouled as he dribbled towards the box and THOMSON stepped up to plant the free kick beyond the reach of Barrett in the Brocton goal. Brocton were reeling and Sphinx were going for the kill as Danny HARRIS produced some lovely footwork to create the chance to shoot and he buried his effort into the bottom corner in the 10th minute. Sphinx were 3-0 up within 10 minutes and all the goals were extremely well taken. Sphinx were showing no signs of sitting on their lead and some wonderful one touch passing around the box carved open Brocton with Mitch Thomson denied by a Barrett save. There wasn’t long to wait for the fourth with Mitch Thomson harassing a Brocton defender into a critical mistake that was punished emphatically as THOMSON slipped it past the keeper and into the overworked net to make it 4-0 after just 19 minutes of play at Sphinx Drive. The Sphinx finishing had been excellent but the defence had barely given Brocton a sniff and the central midfield pair of Webb and Cairns were dominating their areas too. The confidence was flowing in the Sphinx team and that was demonstrated by Danny Harris picking out Dave Barnett with a great diagonal ball that was taken down well by Barnett but his shot ended up just wide of the post. Ten minutes from half time Brocton got a rare chance with Dell played through on goal but a decisive Dutton came out to force him to lift his shot just wide of the target. Sphinx had eased off a touch as we approached half time but with the strength of their bench it was set be another difficult half for the visitors as they looked to salvage some pride.

Brocton were slow to emerge from the dressing rooms for the second half but they held off Sphinx well in the opening ten minutes of the second period. In fact it was Brocton who came closest to scoring first with a ball in from the left by Kinsella lifted over the bar by Lomas when he looked certain to score. That moment of threat from Brocton inspired Sphinx into stepping up a gear and they soon added two further goals to their tally. The fifth goal came thanks to a quick short corner from Barnett that he received back to send in an inswinging cross that was met by a deft flick of the head by THOMSON to claim his hat-trick in the 58th minute. Just a minute later THOMSON was away down the middle and he calmly slotted it past the exposed Brocton keeper to get his fourth of the match and put Sphinx 6-0 up before an hour had been played. A couple of substitutions followed as Stuart Dutton gave a well earned rest to Mitch Thomson and Dave Barnett. There was no let up for Brocton though as they were replaced by strikers Jarrell Hylton and Dayle Kenny. Brocton were still looking for a goal and it was a brilliant save by Scott Dutton from a Brocton corner that kept the clean sheet intact. Sphinx then added another striker to the field of play with Ryan Harkin coming on for the final 2o minutes. It took HARKIN just 7 minutes to show us what he’s all about with a display of pace that left Brocton floundering and his finish from an acute angle was inch perfect as it nestled in the bottom corner. Brocton were still keeping Sphinx on their toes sporadically and another fine save from Dutton denied them a consolation with minutes to go. Dayle KENNY joined Sphinx from Bromsgrove during the week and he gave us a glimpse of his strengths with a driving run through Brocton that was only ended with a foul in the penalty box. Kenny got back up to put the penalty away in the 90th minute to complete the scoring and shortly afterwards the referee brought to an end an unforgettable afternoon at Sphinx Drive.

It’s impossible to ignore a man who scores four goals within an hour and his finishing was outstanding today but you don’t win by such a big margin without the whole team performing. Scott Dutton kept his concentration well and produced a couple of fine saves to get a well deserved clean sheet. The back four are looking like they will become a very solid unit and the work of Webb and Cairns in central midfield didn’t go unnoticed. Danny Harris has some real quality on the ball and thrived playing further forward. Dave Barnett has that touch of class about his play on the right and Douse provided threat with his quick and direct running.