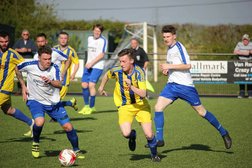 Sphinx travelled to second placed Coleshill Town and returned with the three points after a thrilling game at Pack Meadow. Sphinx have hit good form in recent weeks and inflicted a first home league defeat on Coleshill since mid December. Harkin was the man of the moment again with all four Sphinx goals as Sphinx produced some scintillating football at times to come up with an impressive result.

The Sphinx form has coincided with a settled squad and they have overcome a period of suspensions brilliantly to provide some results and performances to be proud of. Just the one change for Stuart Dutton with Pierce Kiembi returning from injury to replace the unavailable Scott Lower. Reece Blackmore was also serving the last game of a suspension so a few tweaks were required to the way the team were set up.

The weather was wall to wall sunshine and the conditions were warm ahead of kick off. A sloppy start from Coleshill almost gifted Sphinx the lead as early as the 2nd minute. The Coleshill keeper hit a poor clearance and Woodward seized on it to drive a effort straight back at goal but the keeper collected the shot to save his blushes. Sphinx were looking to utilise the 3G pitch with their play but the first serious save came from Dutton in the Sphinx goal with a fine reaction keeping the scores level. Sphinx then produced a wonderful move from the back which delivered the opening goal. The move burst to life with a driving run through midfield from Kiembi and he then picked out the perfect pass for McGarrity on the right. McGarrity then looked up from his position wide of the box to pick out HARKIN on the edge of the box and his first touch took him past a defender with ease before he rifled his finish into the far corner from an acute angle. A delightful goal that would have graced a far higher level of football and topped off with a finish typical of a striker bursting with confidence. There are goals in this Coleshill side so Sphinx would need more to secure any kind of result and they went about looking for more now they had the lead. Downes threaded a great ball through the defence to send Kiembi away but he was thwarted by an alert Coleshill keeper. The next Sphinx opportunity soon came from a corner with Eggleton crossing the partially cleared ball back into the box and Woodward then firing back across goal again for Kiembi to head just over the bar. Coleshill responded by forcing Dutton to save with his feet as the game was developing into a really entertaining match. Sharp thinking from Woodward from a free kick put Harkin away but a rare miss-hit from him let off Coleshill just before the half hour mark. Coleshill never learned their lesson and minutes later the Woodward/Harkin combination released HARKIN through on goal and he made no mistake this time with a great finish across the keeper on 33 minutes. Sphinx were good value for their two goal lead and Lewis Hudson came close to adding a third just before half time when his free kick took a nick off the Coleshill wall and very nearly deceived the keeper as a result.
HALF TIME: COLESHILL TOWN 0 COVENTRY SPHINX 2

Sphinx were forced into a change at half time with the dangerous looking Pierce Kiembi being replaced by young striker Kyle Jaynes. A reshuffle was required in the team as a result of the substitution with Coleshill taking advantage of this by getting a goal back within 6 minutes of the restart. The Sphinx response was emphatic with the two goal cushion restored within 2 minutes. Harkin claimed his hat-trick goal and he had Kyle Jaynes to thank for the assist. A burst of powerful running down the left from Jaynes got him to the by-line and his lofted cross to HARKIN lurking at the far post gave Harkin the chance to secure his second hat-trick in two games with an accurate finish into the bottom corner. Coleshill then exerted a spell of pressure which ultimately led to them getting a goal back again with Beckley making it 2-3 in the 67th minute. Sphinx had played some really good football but now was the time to show us their character. They did just that with Coleshill pushing hard for the equaliser. Sphinx defended well and when Coleshill did get through they either couldn't beat Scott Dutton or produced wayward finishing. Sphinx remained a threat going forward and it was that man HARKIN again who got the fourth goal on 84 minutes which looked to have sewn up the match. Typical of the match, Coleshill wouldn't lay down and they reduced the deficit to just one goal again on 88 minutes to set up a tense finish but Sphinx had done enough to take a superb three points away from Pack Meadow. Once Sphinx had gone in front, Coleshill never got level again and whenever Coleshill threatened to get back in the game Harkin put another goal away in response. A thrilling game to watch and a performance to be proud of from the Sphinx lads today.
FULL TIME: COLESHILL TOWN 3 COVENTRY SPHINX 4

Kieran McCalla - Sums up everything this team is about. Plays wherever he is required and his commitment to the club is clear.

Luke Downes - Thrived in midfield and looked back to his best

Liam Cairns - Excellent. Breaks up play and fills holes all over the pitch

Nathan McGarrity - Brimming with confidence with regular football. works hard for the team and no shortage of skill

Callum Woodward - Really hit form in recent weeks. His experience is invaluable and a genuine leader in the Sphinx midfield

Jamie Towers - Another with bags of experience. His ability is clear despite being in the twilight of his career

Ryan Harkin - Four goals and could have had more. A constant threat and prepared to do his defensive work too

Kyle Jaynes - Clearly has ability and the young man will only get better as his fitness improves. Set up one goal with his tenacity and a good option from the bench