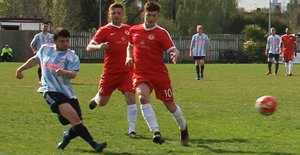 Sphinx are the Real Thing as Walsall feel the force

Three consecutive wins, three consecutive four goal hauls and today they crowned that with a clean sheet. Sphinx are certainly ending the season in style and they served up a treat for the home crowd on Easter Saturday with the defeat of a Walsall Wood side that had won their previous two games without conceding. Towers got himself two goals which were complimented by two brilliant strikes from McGarrity and Blackmore to seal another three points.

Manager Stuart Dutton made two enforced changes to the side that had beaten Coleshill Town the week before. Downes and top scorer Harkin were both unavailable but two excellent replacements came in as Lower and Blackmore made their returns to the side. Sphinx are targeting a top 10 finish and Walsall Wood were now close to safety in the MFL Premier Division so there was still motivation there for both sides but Sphinx were the first to show their intent with a disallowed goal in the third minute. A fine diagonal ball picked out McGarrity on the right and he headed straight for goal to hit a drive that cannoned off the bar. Woodward was quickest to react to head the ball home but the celebrations were cut short by an offside flag. Kiembi went close after 15 minutes with a header just wide of the far post but as the game settled down chances were limited. The game became fractured due to a number of free kicks but it suddenly erupted just after the half hour mark. There appeared to be an incident by the touchline and the outcome was a Red Card for Walsall Wood. I was unsighted by the occupants of the technical areas blocking my view but the end result was the visitors were a man short for the remainder of the game. Sphinx took advantage as we entered added time in the first half to go a goal up just before the break. The goal came after a Blackmore pass picked out McGarrity on the right and he tormented the full back before delivering his cross. The cross deceived the keeper to bounce off the bar and TOWERS reacted quickest to stab home the loose ball from close range. A great time to score and Sphinx had time to go close to a second with a curling low effort from Woodward saved well. Sphinx had a goal and a man advantage but Walsall Wood were still well in the game and there was work to do in the second half still.
HALF TIME: COVENTRY SPHINX 1 WALSALL WOOD 0

Half time gave the Manager the opportunity to make two substitutions with Matt Taylor replacing McCalla in defence and Rhys Deehan replacing Kiembi in an attacking role. Sphinx came out on the front foot and they soon had the ball in the net again but once again it was disallowed for an apparent foul on the keeper. Towers had nodded in a Woodward cross but he was adjudged to have fouled the keeper in the process. It looked a soft one to me and Towers can consider himself unfortunate there. Sphinx maintained their attacking threat with McGarrity setting up Hudson for an effort that hit the bar. McGARRITY was the man with the next chance and with his team mates urging him to shoot he powered a drive into the top scorer to leave the keeper with no chance. A great strike in the 59th minute to put Sphinx 2-0 up and the visitors were really up against it now. Sphinx were now taking control of the game and they went in search of more goals with the excellent Deehan going close with a drive on 74 minutes. The third goal came on 76 minutes with TOWERS played through on goal and he drew the keeper before slipping it past him to claim his second goal of the game. Stuart Dutton took the opportunity to withdraw Woodward, who was making his 100th appearance for the club, and replace him with promising 16 year old striker Gerald Zefi. BLACKMORE then hit a thunderbolt from fully 30 yards to make it four on 81 minutes as Sphinx were threatening to run riot now. McGarrity then forced a good save before Hudson tried his luck with a drive inches wide of the far post. Towers saw a header saved in his search for his hat-trick but Sphinx had done more than enough to secure an emphatic victory. Once the second goal went in early in the second half there looked to be only one winner of this match. 4 goals, 2 disallowed efforts and the cross bar prevented this being a bigger win and the three points puts Sphinx in 2nd place in the current form table. Next up is a visit to Long Eaton United on Easter Monday at 3pm. The lads would love your support so why not make the trip up the M1 and get behind your team. Up The Sphinx.
FULL TIME: COVENTRY SPHINX 4 WALSALL WOOD 0

COVENTRY SPHINX MAN OF THE MATCH: Nathan McGarrity
An impossible task singling people out after that performance but the experience of the likes of Lower, Woodward, Towers and Eggleton is proving key to this team. The energy the likes of Blackmore and McGarrity provide also adds a great deal to the side. Deehan produced a highly impressive 45 minutes after coming off the bench too. McGarrity gets my Man of the Match today after a 90 minutes full of threat with his direct running and strength on the ball and he topped that off with a fine strike into the top corner for his goal.