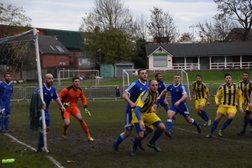 Sphinx thumped in the Black Country

Lye Town have suffered just one league defeat all season so there was absolutely no doubt about the task ahead of Sphinx today. They ended up on the end of a 5-0 defeat but playing just about the whole game with ten men certainly played a part in the severity of the defeat. Lye Town most definitely deserved the win and I’m sure they’ll put many other teams to the sword this season though.

Just a couple of changes today with the returning Scott Lower filling in at left back in what is turning out to be a cursed position this season. I can think of seven different players who have played there this season already and today right back Lower was the man to take it on. Aron Wint also returned to the side although his day wasn’t to last long! Stuart Dutton was expecting to make a third change but George Cleet was available at the last minute. Loan player Cleet was due to play for his parent club Halesowen Town but with their match being lost to the weather he was available to play for Coventry Sphinx. The Lye Town pitch was showing signs of cutting up and it wasn’t in it’s best condition as the winter weather starts to set in but that’s something that all teams will have to get used to in the coming months and it’s teams who find a way of playing through the conditions that will prosper.

We had barely settled into our positions when the biggest talking point of the game happened. We were five minutes in when Sphinx defender Scott Lower was fouled but the referee allowed play to continue and Aron Wint then slid into a tackle in a genuine attempt to win the ball. A clear foul but the speed that the Lye Town players gathered around Wint and the referee suggested a harsh booking was on the way to settle things down. The referee then consulted his assistant and promptly showed the red card to a bemused Wint and an equally bemused crowd I would imagine. Arguably one of the toughest away games of the season just got a whole lot tougher. Sphinx coped well initially with the one man disadvantage and after 11 minutes Pidgeon got a shot away from the edge of the box. Lye Town got themselves in front on 18 minutes with a good ball in from the right which was swiftly buried by Jack Till in the box. This was the trigger for Stuart Dutton to make a substitution with the very unfortunate Motshweni making way for Johnston as he looked to add more steel to his midfield. Midway through the half Ryan Smith drove at a defender and was past him and on the way into the box before a cynical challenge brought him down. Obvious case for a card but the defender got away with that one. George Cleet stepped up to fire in a goal bound free kick but it was a comfortable take for the Lye Town keeper. It was an identical combination that gave Sphinx their next opportunity with Smith again fouled on the edge of the box and Cleet again taking the free kick that this time went over the bar. Sphinx had given it a really good go without really threatening the goal and they came desperately close to equalising just before half time. A succession of Sphinx corners put Lye Town under their first spell of pressure and Eggleton was agonisingly close to getting the faintest of touches to a header that would have beaten an exposed keeper. A great effort from Sphinx but after playing with 40 minutes a man short they could well end up tiring in the second half.

The feeling was that Sphinx were by no means out of this yet but the critical moment came after 58 minutes when Lye Town pounced on a loose ball on the left and proceeded to deliver an early cross that was finished in off the post by Ben Billingham. Clinical stuff from the hosts and it was difficult to see a way back into the game for Sphinx now. Ryan Harkin then replaced the hard working Pidgeon for Sphinx but shortly after Lye Town got their third in the 67th minute to end the game as a contest. Dallison was the man to put away the cross and two further goals in the 72nd and 75th minutes from Billingham and Jeavons put an unhealthy look on the scoreline. That was the end of the scoring and Lye Town ran out deserved victors but the 5th minute Red Card put paid to any hopes Sphinx had of getting a result today. They’ll be disappointed to concede five in the end but it’s a game that should be swiftly consigned to history and they’ll be looking to respond to that when they take on Highgate Utd at Sphinx Drive on Wednesday evening.

MAN OF THE MATCH: REECE BLACKMORE
Not too much to pick out today but I felt Ryan Smith was starting to show glimpses of what he is capable of as he returns to full fitness. My pick is Reece Blackmore who certainly showed no signs of giving up and continued to try and play his football on a sticky pitch.