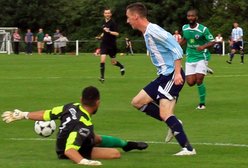 After a thrilling effort on Saturday ended Bromsgrove’s unbeaten run, Sphinx had little time to prepare for their next fixture on Bank Holiday Monday. The Loughborough University Stadium is a bit of a bogey ground for Coventry Sphinx too. Before today they had won only won once here and that was back in 2011. A second consecutive clean sheet and a Ryan Harkin strike secured the points today and the players put in a monumental shift to take the three points back to Coventry.

A combination of suspensions and unavailability meant the squad was looking a little thin and the team just about picked itself today. Youth team striker Steven Stanbrook got a call up to the squad and he looked thrilled to be getting an opportunity. Despite the issues with today’s squad, there was just one change to the team that beat Bromsgrove on Saturday with Nathan McGarrity coming in for Rhys Deehan.

Loughborough, as you would expect, are a young side but they attract players from all over the country due to the reputation of the University. They look to play football the right way and are always one of the fittest teams in the division. A hot day added to the concerns of a second match in 48 hours but Sphinx have already showed us they are made of stern stuff this season. Chances were strictly limited in the opening half an hour but Sphinx were almost gifted a goal when an over hit back pass left Loughborough keeper Jake King in trouble. He recovered his ground well to prevent the ball going in but his legs collided with the post which left him requiring treatment. He opted to continue but the first time he kicked the ball again it became clear his afternoon was over. On came substitute keeper James Stallan and one of his first tasks was to pick the ball out of his net. Callum Woodward started the move with a lovely through ball for Sterling and his fierce shot could only be parried out to the lurking Ryan HARKIN who immediately stroked it into the gaping goal. 1-0 Sphinx after 35 minutes and clinical finishing of their first genuine chance. Harkin’s tail was up now and minutes later he was driving at the Loughborough defence. His run took him into the six yard box, just wide of the left hand post and his effort on goal beat the keeper before a goal line clearance prevented Harkin doubling his tally. Just before half time Loughborough had a sight of goal but the well hit drive from the left of the penalty box failed to trouble Dutton in the Sphinx goal.

Loughborough used their two remaining substitutes at the interval as they looked to get back level but it was Sphinx who threatened first with a superbly hit free kick from Callum Woodward. The keeper did well to keep that out and Guest then headed over the resulting corner. Loughborough’s attacking threat was being thwarted by a focused and determined Sphinx defence while the midfield were getting through good amounts of work. Scott Dutton marshalled his defence well and all this combined to offer Loughborough little opportunity at goal. Harkin was the next to try his luck after cleverly dropping deep to receive the ball and then driving forward to hit a drive just wide of the post. Loughborough then had a great chance to equalise with a cross driven across the face of goal that appeared to come off a Sphinx defender before Dutton reacted sharply to keep the ball out. The follow up thudded against the post before being cleared away by a relieved Sphinx. That was to end up being Loughborough’s best chance of an equaliser and Sphinx could well have doubled their advantage with ten minutes to go when Harkin was through on goal with just the keeper to beat. Credit to the keeper though who prevented Harkin from scoring and Harkin then had one final chance with a drive forcing a good save from University keeper James Stallan.

As the scoreline would suggest, Sphinx had to work hard for this win but the key to this victory was the outstanding defensive play that limited Loughborough to very few chances. It wasn’t just the defenders to take credit for this, the whole team contributed to this win and that’s becoming a recurring theme already this season. Sphinx could have had more but one was enough to take the points today. Coventry Sphinx return to action on Saturday 2nd September when Sporting Khalsa visit Sphinx Drive for a Midland Football League Premier Division match.

Another difficult choice with the team play evident again. Sterling looked good again although Harkin was the main threat at goal. Power house midfielder Jean Dakouri got better as the game went on and he’s really looking the part in the Sphinx midfield. A special mention for Callum Woodward who played after being substituted against Bromsgrove on Saturday with a knock, climbed Mount Snowdon on Sunday and returned to the Midlands on Monday to pull on his Coventry Sphinx shirt. His attitude and commitment to this club is outstanding and a fine example of the team spirit in place at the club. The defence were highly impressive again and the experience at full back with Lower and Stringfellow combined with tough centre backs Quirke and Guest made sure Scott Dutton had every chance of keeping a clean sheet. He did just that with one outstanding stop mid way through the second half the highlight. Louis Guest was very close to getting my Man of the Match on Saturday and he performed superbly again today.