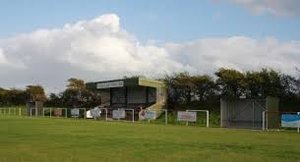 Second Half
CPD Glantraeth looked more to build on the positives in the first half with Huw Griffith again finding spaces outside the box again finding his effort saved. In the 50th minute Llannerchymedd found themselves down to 10 men when a player received a second yellow card for a reckless tackle. But, it was Llannerchymedd who got the next goal in the 53rd minute. The ball was knocked into the box and in the scramble the ball seemed to be knocked into the path of the striker with a handball which was missed by the referee (CPD Llannerchymedd 1-CPD Glantreath 2). CPD Glantraeth continued to create chances with Iwan Kirkham heading wide from close range from a Cian Evans cross in the 60th minute. In the 65th Aaron Rickards done well to create a goal scoring chance but fired over. Llannerchymedd then found themselves down to 9 men when a midfielder tackle was deemed high by the referee and getting a second yellow and being sent off. In the 69th minute Ioan Evans replaced Dillon Roberts. In the 72nd minute Cian used a great piece of skill to beat the Llanerchymedd defence and fired past the keeper to get his second (CPD Llannerchymedd 1- CPD Glantraeth 3). In the 75th minute Corben Renton and Morgan Rowlands replaced Aaron Rickards and Iwan Kirkham. With the game coming to a close Corben Renton adjudged off side and received a yellow card for voicing his disappointment at the decision. The final whistle came with CPD Glantraeth picking up their first 3 points of the season.

We now move on to Saturdays game away to Bro Goronwy which will be another test for the team. Also, with the transfer window looming the club will be hoping to make a couple of additions to strengthen certain areas of the team.