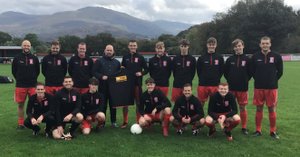 On a hot sunny day, LLanrug earned a well deserved first league win of the season with a 4-1 victory against Amlwch Town

Early chances for the home side, but some good early saves by the Amlwch goalkeeper.

Pretty even game for the first 20-25 minutes before a well earned drinks break in the hot sunshine.

Llanrug struggling towards the end of the half to create any clear cut chances, with the away side defending well.

Only notable chance before half time came when Lloyd hit the bar from 20 yards, after a good advantage played by the referee.

Half time 0-0. Llanrug unable to take any of their chances, with Amlwch a threating a few times during the half.

Early 2nd half goal for Llanrug, after a quick turnover of the ball in the Amlwch half, Lloyd found himself through on goal, his shot from the edge of the area parried away by the goalkeeper, the ball falls to Llywelyn for an easy tap in.

From the kick off it’s a penalty for Amlwch, it’s converted 1-1

Llanrug on top, creating several changes from short corners, the home side also hit the bar for the second time in the game. M Roberts with the effort

A turn and shot from Lloyd, brings out another fine save from the goalkeeper.

Sadler beats the off side trap running from deep to put Llanrug 2-1 up.
A long clearance, Llywelyn keeps the ball alive, a nice lay off then by Sadler finds Lloyd, his half volley from 12 yards finds the corner of the net.
Llanrug hit the woodwork for the third time in the game, Edwards this time

Cross from the left by Sadler, a fine diving header from S Roberts, just after coming on

In the end a comfortable home win, and 3points
The Welsh Cup tie against Penrhyn next weekend, there is plenty to analyse and work on during the week ahead