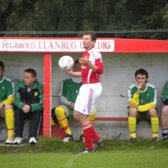 United had a depth to their squad for the first time this season, back into the starting line-up after missing last week’s win against Gwalchmai due to a wedding, came club captain Eifion Williams and forward Mathew Phillips, and there was a substitute role for Chris Joyce and Carl Griffiths.

United commenced at canter, and were very unfortunate not to take an early lead on two minutes. A goal-kick by Dave Ball was brilliantly controlled by Mathew Phillips, he then passed the ball to Rhys Roberts who set up Ceirion Williams from just outside the penalty area at angle, his curling shot struck the inside of the far post bounced on the gaol line and hooked to safety by defender.

A fine individual run down the left flank by Mathew Phillips on eighteen minutes, ghosting past a couple of Glan Conwy defenders, but his low drive from the angle went into the side netting. But within two minutes United got the breakthrough, a goal-kick by the visiting goalkeeper was headed down by Jason Jones, into the feet of striker Rhys Roberts who timely passed the ball into the path of midfielder Carl Wayne Jones, who took a couple of touches before striking the ball into the bottom right hand corner of the net from twenty yards out, to give United a deserved lead.

At this stage United were firmly in control, but despite dominating proceedings and creating several good goal scoring opportunities they failed to find the back of the net. A fine strike by midfielder Jason Jones was smartly saved by the Glan Conwy keeper on twenty three minutes.

Young full-back Gethin Phillips had to be replaced due to injury on twenty seven minutes, Liam Robertson came as a central defender and Iwan Price was shuffled across to play at right back. Yet another fine run and shot by Mathew Phillips down the left flank on twenty nine minutes should have doubled United’s advantage, but his strike went inches wide of the far post.

The second half started as the first ended with United firmly in control, two fine crosses from the left flank in a space of a minute one from Rhys Roberts and the other from Ceirion Williams should have produced a goal for United, but they failed to capitalise. Within five minutes United finally found the back of the Glan Conwy net, it was Carl Wayne Jones who finished off a well worked free-kick routine involving David Noel Williams and Mathew Phillips.

United lost their way following the changes, and the visitors enjoyed their best spell of the match. A goal line clearance by United’s Chris Joyce from a corner on the right, kept United’s advantage. A deep cross come shot from visitors captain Shaun Shannon from the right flank on seventy nine minutes evaded Dave Ball the United keeper and found the back of the United net. The visitors got the lift they needed, and it was squeaky bum time for United, but the rearguard held firm under pressure and were well marshalled by club captain Eifion Williams, and an inspirational performance in central midfield by Jason Jones who covered each blade of grass twice over.

A fine win by United and a precious three points which see them climb up the League table to seventh position. A hard away league encounter next Saturday to the Isle of Anglesey to face village club Gwalchmai for the second time this month.