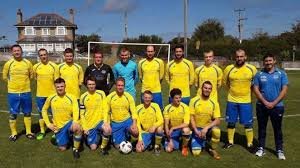 A much stronger Waunfawr team travelled to Dwyfor Park on Saturday and they made life hard for us for most of the match. 1st half started quite even with little chances being created by either team, however that bit of luck you need sometimes came our way when Darren was supposedly brought down in the box just before the 20 minute mark which resulted in a very harsh penalty in my mind, Sion Parry put it away neatly into the corner for his 51st goal of the season. That goal relaxed us and we scored 2 more in the space of 2 minutes just before half time, Darren withe our second when he reacted well to his own shot hitting the bar when he kept his composure to control the ball and tap in before a very well taken goal by Joe Soar put us 3-0 up at half time. it was a bit flattering for us and harsh on Waunfawr but we were clinical when we needed to be.
We started the 2nd half cautiously, keeping the lead we had, Waunfawr did not create many chances but kept on knocking on the door and eventually got their reward with about 20 minutes left, we made 3 substitutions which seemed to give us a 2nd wind and the match was over as a contest when Joe Soar headed in a superb Mark Godfrey corner on 78 minutes. we then saw the game out well to secure a 4-1 win and another 3 points.
To summarise - a good 3 points, hard fought and pleasing to see the squad getting stronger, the subs coming on and performing well yet again which bodes well for the last 7 matches
Share via
FacebookTwitter
https://www.pitchero.com/clubs
Recent news