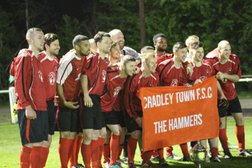 The Hammers win the Premier Division League Cup on penalties.

Cradley held their nerve to beat our worthy opponents Wellington FC 6-5 on penalties at Wolverhampton Casuals Fc in a nail-biter.

Despite notching up 18 goals between us in our two league games this season neither Cradley nor Wellington could score in normal time or extra time.

Uncharacteristically Cradley's skipper and top-scorer Chris Bladen hit the bar with a penalty in the first minute of extra time and had his shoot-out spot kick saved by Wellington's talented Chris Mancui in the first kick of the final count-down.

With the result on a knife edge Ben Johnson, Adam Meacham, Will Tibbetts, Sam Wilkinson, Ollie Oatley and Ryan Edwards confidently put away their penalty kicks while our hero goalkeeper Matt Jones saved from Ben Thomas and Joe Davis to send the Hammers camp into ecstasy. Our first cup success for 40 years we think.