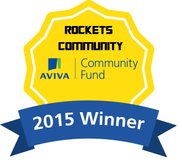 We would like to say a huge thank you to everyone who supported us and the Aviva Community Fund
Steven Beaty, Community Development Manager

Following a national social media campaign that saw backing from around the country, a total of 10,811 votes was enough for the Cramlington Rockets Community to make it to the final judging stage.

After submitting a thoroughly written final submission, it has been a tense wait for the Rockets.

The winners were announced on the Aviva Community Fund website on Monday 29th June.

The Rockets were unsuccessful in their category of ‘Financial Adviser’ submitted, losing out to the worthy cause of Northumbria Blood Bikes for the £25,000.

However, after allocating the awards Aviva had funds left over. This was caused by a shortfall in projects submitted in some funding levels and categories and some projects not asking for the full amount in their funding level.

The judges then chose the Rockets to be one of only three additional projects to be awarded their requested funding of £25,000.

“I can’t believe it” said a gobsmacked Community Development Manager, Steven Beaty. “This funding will transform the Community department and allow us to expand what we do in the local area.

We could not have done it without the support of the Rockets and all the rugby league family. We worked really hard to put together our submission but it would not count for anything if everyone else did not believe in us.

We would like to say a huge thank you to everyone who supported us and the Aviva Community Fund. It means a lot that the judges thought we deserved the funding despite the strength of competition. We cannot wait to get started on our new projects now we have the funding."