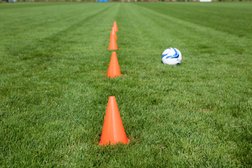 Crawley in 7th heaven as they thump London Colney 7-1.

Crawley Green were in 7th heaven as they thumped London Colney 7-1 to record their biggest ever win in the Premier Division. A troubled Colney had a large number of players leave during the week and Manager Ken Charlery's side were under the cosh from the start of the game.

In the opening minutes Crawley's recent profligacy in front of goal continued when Phil Draycott missed an absolute sitter after being set up by Sam Holmes.

Crawley's Billy Lobjoit had a shot saved by Jack Metcalf and Holmes was also denied by a fine save from Metcalf. The rebound fell to Lobjoit and his shot crashed against the bar. After 18 minutes the pressure finally told as Crawley opened the scoring. Sam Holmes was played through and he neatly lobbed Metcalf to make it 1-0.

Aaron Morgan had a an effort go over before Crawley doubled their lead after 31 minutes. Holmes played in Draycott who was bundled over in the box and the Referee pointed straight to the spot. Mark Bunker stepped up and made it 2-0. Shortly after Metcalf kept out an effort from Lobjoit who smashed the rebound over the bar.

To their credit Colney kept battling and they created 2 chances to draw level before the break. Firstly Crawley's Tyler Ingham headed a shot from Liam Andrews off the line and then Bryan Bontamba fired a half chance over the bar and it finished 2-0 at half time.

In the second half Crawley completely dominated the game as they ran in 5 goals. Two quickly became 3 as Holmes fired in a cracker after being set up by Draycott. Eleven minutes later Holmes completed his hat trick with another fine strike which flew past Metcalf.

The Maroons took the opportunity to blood two products from their Under 18 side and put on James Younger and Spencer O'Leary. Younger was quickly into the action as he combined with Morgan to set up Alumanimilo Ajigbolamu (Nimi) who made it 5-0 after 67 minutes.

Five minutes later 5 became 6 with the cheekiest goal of the game. Mark Bunker took a quick free kick to play in skipper Phil Draycott who curled the ball round Metcalf to make it 6-0. Nimi and Draycott both had shots blocked before O'Leary lashed an effort over the bar. O'Leary went close again before Crawley made it 7-0 after 80 minutes. Draycott fired in a free kick and the rebound fell kindly to Nimi who fired the ball past Metcalf.

Colney fought until the end and got a break in the 87th minute as a poor back pass from Michael Draycott resulted in a tap in for Richard Acheampong to make it 7-1. In the final minute Younger had a shot cleared off the line and the game finished 7-1.

Crawley Green Reserves won 3-1 against AFC Kempston in the Bedfordshire Senior Trophy. Timmy Akerele, Charlie O'Mahony and Jamie Hunter got the goals. Next week they travel to Caldecote.