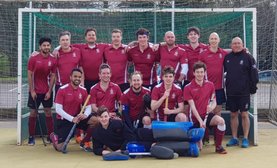 2018/19 was a year of rebuilding for Crawley 2’s. New Captain Scott Gibbons and his Vice Captain Nick Bennett were tasked with steadying the ship after a summer which saw a number of key players; including the captain and goalkeeper, depart for new challenges.

The start of the season was tough for this young side and 5 straight league defeats saw the 2’s enter November with 0 points. 5 wins from their next 6 games, including a perfect November confirmed that the team was growing and were more than good enough to be competitive in the league. In this time they also progressed through the opening rounds of the England Hockey Championship (Tier 4) with a few morale boosting wins on Sundays in October and December.

The second half of the season was as tough as the first, but wins against Lewes and Littlehampton ensured survival with two games to spare and a quarter final win in the EH Championships left the players just 1 game from a Lee Valley final. That day came in the middle of March when the 2’s showed their character to twice fight back from behind to take an epic match vs K Sports to penalty flicks. A perfect flick record and a heroic keeper later, a jubilant Crawley second team were going to Lee Valley! To then add the icing on the cake a 6-2 demolition of East Grinstead the following weekend brought a decent league campaign to a close.

But the hard work was not over. The group of dedicated players and coaching staff worked hard to be ready for their big day out on the Olympic Park at the start of May. A 9am start was not ideal, but every player was focussed, ready and in good spirits to face a young and athletic University of Nottingham team.

A hardworking and spirited performance saw Crawley come back and be level at 1 apiece at the break, but unfortunately a strong performance and some late breakaway goals from Nottingham saw the game end with a deserved, if not slightly flattering 5-1 Notts win. Yet despite this every Crawley player gave their all until the final whistle and were gracious in defeat; doing themselves and their club proud.

Skipper Scott Gibbons said of their season:
“I am immensely proud of each and every player this season. As a newly assembled and young team it would have been easy to become overwhelmed at the task at hand; especially after a disconcerting start to the year. Yet to see the improvement, determination and spirit the team has displayed has been very rewarding. To reach the final of the England Hockey Championships was an amazing achievement and everyone involved should be so proud! The way that the players applied themselves and the good grace that they displayed in defeat at Lee Valley is also something that the club should be so proud of.
I also want to say a big thank you to everybody that has played, umpired, coached and supported us throughout the season.”