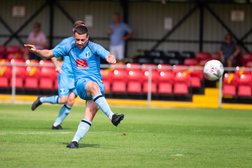 ALL SQUARE IN THE HEAT

NEW SIGNING NATHANIEL BLANKS SUFFERED A HEARTBREAKING achilles tendon injury as The Millers and Glebe shared the spoils in the sun.
Coming on as a half time substitute, Blanks collapsed in pain just 2 minutes after entering the fray, requiring assistance to leave the pitch before being whisked off to a local hospital.
In fairness, both teams extended a lot of energy in an often lacklustre pre-season friendly, with temperatures in excess of 30 degrees making a fast, flowing spectacle difficult to achieve.
With Connor Dymond controlling the game from just in front of the back 3, and Gavin Tomlin in a slightly withdrawn role, it was the visitors who created the first opening as Tomlin found Denzil Gayle 20 yards out - the speedy winger’s shot across the keeper being well saved.
The Millers took the lead in the 22nd minute - Ryan Flack firing home from distance following excellent work from Tomlin.
The equaliser for Glebe arrived in the 36th minute - Frankie Sawyer’s 20 yard free kick deflecting into the net off the defensive wall, following a foul by Rory Hill.
With The Millers making 3 half-time substitutions, the hosts started to enjoy the majority of the possession, although Gayle’s pace down the right flank caused increasing concern on the counter attack.
As substitute Ade Yusuff proved a handful, he picked up a second yellow card in two appearances as he hotly disputed an alleged “handball” incident, as some of the Officials’ decisions caused increasing frustration on both benches.
So another good workout for Kevin Watson’s team despite the disappointing loss of the stricken Blanks