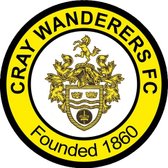 The 2012/13 season looks to be a critical one for the future of Cray Wanderers FC, the oldest football club in London and the second oldest in the world.

The Wands have requested planning consent from Bromley Council to build a new football stadium at Sandy Lane, in St Paul's Cray. Unfortunately for the Wands after nearly five years of hard work and expense their initial application was thrown out on 20 September when the LB Bromley planning committee said that the club’s plan for a new football ground and community sports complex in the Crays was insufficient good reason to allow development of a site that is designated as greenbelt.

Cray Wanderers have been in exile from the Crays since 1972 when they lost the Grassmeade ground in Chelsfield Road, due to housing development. They moved to Oxford Road, on the borders of Footscray and Sidcup, but when that ground was ruled to be unsuitable for Step 5 football (the Wands were then playing in the Kent League) it became necessary from 1998/99 to play first team matches at Hayes Lane, as tenants of Bromley FC.

Cray have been most grateful to Bromley FC for granting them the ground-sharing arrangement, but with the lease due to expire in 2014 the need for Cray to have their own home ground has become paramount.
The first origins of Cray Wanderers are linked to the construction of the London, Chatham & Dover railway line during 1858 to 1860. During their leisure time, migrant workers kicked a ball around, and that is how the club originated in the St Mary Cray village. The pitch at Star Lane is now a cemetery, and is located beneath the nine-arch railway viaduct that spans the Cray Valley. The industrial belt of the River Cray, especially the paper mills, provided much of the club's support up till the 1950s.

Cray Wanderers were a strong force in senior county football at the turn of the century. After being Kent Junior Cup semi-finalists and finalists in 1890/91 and 1891/92 they entered the first ever FA Amateur Cup competition in 1893/94. They had a spell as a professional club between 1895 and 1907. They were a nursery club for Woolwich Arsenal during part of this period. They were one of the founder members of the Kent League in 1894/95, and they won the championship in 1901/02. Other honours included Southern Suburban League champions in 1898/99, West Kent League champions in 1903/04, and Kent Senior Cup runners-up in 1899/1900.
After World War One, Cray switched to the London League where they remained till 1934. In 1930/31 they won the Kent Amateur Cup. Cray rejoined the Kent League in 1934/35, but their four year stay came to grief when 1936 saw the loss of the Fordcroft ground in Cray Avenue, their home since 1898. Cray were forced to drop into a lower level of football, drifting from one temporary pitch to another while the club committee dwindled to a perilously small number. The team struggled badly in the South London Alliance and the Kent Amateur League.
1951/52 heralded a new era, and an upturn in the club's fortunes, when local businessman Mick Slater took over at the helm. The club was elected to the London League and regained its senior status. Cray moved to a new ground at Grassmeade in 1955. Their stay there was a very successful period in the club's history. Drawing extra support from the commuter town of Orpington, they played in the London League and then the Aetolian League. They were three times crowned champions, won the League Cup twice, and also won the Kent Amateur Cup three times.
Cray switched to the semi-professional Metropolitan League for five seasons commencing in 1966/67. In 1971/72 the Met London League was created by a merger of the Metropolitan League and the Greater London League.

Cray moved to Oxford Road in 1973/74. Johnny Biddle and Jimmy Wakeling proved to be successful managers. In 1974/75 Cray won the Met London League and League Cup, scoring 170 goals in all matches that season. In 1976/77 and 1977/78 Cray won the London Spartan League championship.
Cray decided to return to the Kent League in 1978/79. Success came quickly because Cray won the championship in 1980/81, having been runners-up the year before. Their powerful new team under manager Harry Richardson reached the FA Vase quarter-final and 5th round in those two seasons. After that, the 1980s decade brought only one more piece of silverware, the Kent League Cup in 1983/84. After finishing Kent League runners up in 1990/91, Cray had a lean period during most of the 1990s, with the exception of 1992/93 when they won the Kent Senior Trophy.
A new club chairman Gary Hillman arrived in 1994/95 and Ian Jenkins, a Cray player since 1993, was appointed manager in 1999. By now, Cray were tenants of Bromley FC. As champions of the Kent League in 2002/03 and 2003/04, also reaching the FA Vase quarter-final, they achieved promotion into the Ryman League Division One. Five years later at the end of season 2008/09 came further promotion into the Ryman Premier League.

After three years of establishing themselves in the Ryman Premier, the highest level of football that the club has played at since the war, Cray Wanderers are ambitious to continue their upward progress on the field. However, the club has a critically important agenda off the field in 2012/13 as it pursues a return to its homeland in the Crays, despite the setback from Bromley Council on 20 September when initial planning consent for a new ground was declined.

To mark the 150th anniversary of Cray Wanderers FC the club has published the club history book 'Forever Amber' The book can be purchased from the Club Shop on match days at Hayes Lane, from the Croft Tea Shop at 269 High Street, St Mary Cray BR5 4AR and from Waterstone's at Nugent Way, Cray Avenue, BR5 3RP To order a copy of the book by post, please contact Dave & Jeanne Jackson at 24 Kidbrooke Park Close, London SE3 0EF (tel 020 8856 17160). The price is £17.94 including postage and package. Cheques payable to Cray Wanderers FC.

The club has also published a Statistical Record (1860 - 2010) containing all match results and final tables, plus appearances & goalscorers listed from 1955 onwards. This book costs £5 and can be purchased at the Club Shop or from Dave & Jeanne Jackson. "Great read. A must for every football Fan. Tells the fascinating story of London's Oldest Association Football Club. All the trials, tribulations and sucessess of this Club are recorded in this fine book. Did you know they used to be a Nursery club associated to the original Arsenal team? So much information is packed into this excellent 'History', it's not to be missed" - Amazon Reader