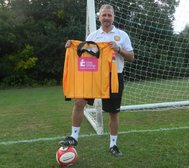 Everyone who comes to watch Cray Wanderers FC on Non-League Day - 7 September 2013 - will do more than see a football match: they will help raise much needed funds to research a cure for breast cancer.

This game is part of a season long fund raising effort by the club in support of the Breast Cancer Campaign and was initiated by Ian Jenkins, the club’s first team manager.

To encourage a big crowd on the day all football season ticket holders, whether Premiership, Championship, Football League or Non-League will get in for half-price.

And for every paying adult, up to four children under the age of 16 will get in free.

Gary Hillman, Cray Wanderers chairman, said: “We will be giving a percentage of our gate receipts on the 7th to the campaign. How much we are able to give will ultimately depend on how many people come to watch the game. So I would urge as many people as possible to come along and help us help fight breast cancer.”

The game will be played at the home of Bromley FC in Hayes Lane, Bromley, Kent and kicks-off at 3 p.m