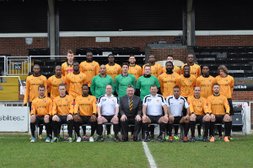 The Wands went down to their third straight defeat at the start of the season following a disappointing afternoon in Hertfordshire to a quick and skilful Ware side.

The game started brightly for Cray as they took the lead after they were awarded a penalty with barely 40 seconds on the clock. Ian Daly was played through and was brought down by home keeper, Rhys Madden. Shaun Welford tucked the penalty home confidently.

From here Ware completely dominated the game and almost levelled when Kieran Bishop went close as Nick Taylor advanced from goal and Bishop from a tight angle pulled the ball wide. They didn’t wait long to equalise however when Bafode Carvalho’s shot took a deflection and looped into the net.

Ware attacked Cray with great pace and Bishop could have scored a hat trick but for some indifferent finishing. The best chance came when he turned the ball over the crossbar from five yards out.

Ware carried on where they left off in the first half with some fine attacking play and took the lead with a cracking goal from Albert Adu who cut in from the right and hit a screamer into the top left corner.

The game turned against Cray completely three minutes later when after a goal mouth scramble, Lee White’s shot was adjudged to have crossed the line. Welford was sent off for dissenting the decision too strongly with the linesman.

At 3-1 the game was drifting towards the end when Cray and Ware were both reduced to nine men when after an off the ball incident a melee ensued and Cray had substitute Dmitri Larin sent off and Ware had Adu and substitute Charlie Ledula dismissed.

With the game entering its final minute Ware were awarded a penalty when Taylor brought down Khale Da Costa. Murat Karagul converted the spot kick to complete an afternoon the Wands would like quickly to forget