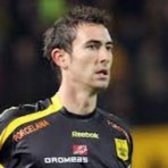 Despite a spiritied fight back Cray were made to pay for a sloppy opening ten minutes as Wroxham maintained their solid start to the season.

Cray made once change to the team which won on Tuesday with Jordan Bird back in for the suspended Steve Springett. The game started 40 minutes late due to traffic problems for the Wroxham team but any thoughts of a lack of sharpness were dispelled by a very quick start from the visitors.

Shaun Welford tested Wroxham keeper, Elliott Pride with a effort on goal before a minute later the visitors took the lead. A swift break led to Jamie Forshaw tapping home a simple goal.

Cray managed to get a foothold in the match and the game had a dramatic three minutes when Jordan Birds's free kick was met by the head of Welford who brought a great save from Pride. A minute later the keeper made another excellent save from a shot from Martin Dynan which he turned over the bar.

From the corner though Wroxham broke away and the very quick Remy Gordon ran on and put in a cross across the goal for Forshaw to finish and complete his hat trick.

Cray managed a goal before half time with a cracking opportunist goal from Ian Daly who picked up the ball from Welford's layoff and arched a shot into the top right corner of the net from 20 yards out.

The game settled down in the second half and there were fewer chances created. Ross Durrant tested Nick Taylor with a long range effort and Cesc Fakinos curled a free kick wide for Cray.

Wroxham came close to scoring again Gordon's cross fell to Garrod whose effort was saved spectacularly by Taylor. Dan Stubbs then hit a long range effort which shaved the left post and went wide. Gordon then lashed a shot wide for Wroxham.

With ten minutes to go and the game drifting, Cray pulled another goal back when Bird's free kick led to indecision at the back and the ball fell to Pat O'Connor who hit his shot high into the roof of the net.

Despite a late burst of activity and a couple of corners Wroxham were able to hold and claim the three points.