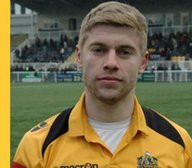 A goal in each half seals victory for Wands

Cray took all three points on their first ever visit to Great Wakering. Despite a few hairy moments early on Cray with a goal in each half achieved in the end quite a comfortable victory on Non League Day in front of a very respectable crowd of 227.

Ian Daly came back into the side after missing Tuesday’s match with injury instead of Pat O’Connor and Shaun Welford returned after suspension in place of Max Fitzgerald. Danny Lye played in central defence with Adrian Stone who has been in good form playing behind the two strikers.

It was the home side who started much the better and were unlucky not to take the lead after three minutes when John Bradley hit the crossbar from David Collins’ corner. Tom Strickland then hit a shot wide as Great Wakering were dictating the play with some impressive passing and movement. Great Wakering came close to scoring on thirteen minutes when Tony Jacobs was played through but his shot was well saved by Darren Behcet and the danger cleared away.

After this Cray began to put some passing moves together of their own with Ishmael Welsh, Ian Daly, Adrian Stone and Shaun Welford linking well. Shaun had a deflected effort on goal and Gary Beckett hit a shot well wide.

Cray took the lead in the 21st minute following their first corner of the game. Cesc Fakinos’ ball into the box was met with a weak punch from goalkeeper Sam Baxter under pressure from Welford and Stone was the first to react to head the ball into the net for his third goal in three games.

Two minutes later it was almost two nil when Welsh’s pass to Daly who turned on a sixpence and was unlucky when his shot went wide of the left post. Bradley shot wide for Great Wakering before Welford tested the home keeper with a header on goal and Stone shot over as Cray ended the half on top.

Dan Stubbs came on at half time as a replacement for Daly who looked to have had a recurrence of his back problem towards the end of the first half. Beckett went more into the middle of midfield and did well there and gave Cray more freedom to attack with Stubbs and Welsh out wide and with Tom O’Connor who was fairly quiet first half complemented the attack lacking Daly.

Much like the first half though, Great Wakering started well and the Wands had trouble keeping the ball for a spell. Cray had a real let off on fifty two minutes when Stuart Hepburn was left unmarked from Collins’s corner and he headed the ball straight at Behcet.

That was probably the home side’s last real scoring opportunity of the game and it was only the lack of quality of some of Cray’s final ball which kept the game in the balance for so long.

Around the midway point of the half, Cray started to carve out some good chances. First Welford headed wide under pressure from Jordan Bird’s cross. Then Welford set up O’Connor who hit a shot over the crossbar from just outside the box. Stubbs hit a shot over the top and Welford had an effort straight at the keeper as Cray looked to clinch the game..

Cray extended their lead on 77 minutes with an excellent individual goal from Stubbs. He ran from just inside his own half towards goal. As the keeper advanced Dan cooly took the ball round him and rolled the ball into the net to put daylight between the teams.

From here Cray saw out the victory although Great Wakering player manager, Dan Trenkel miskicked when presented with a chance in injury time. All in all a very professional job done against lively opponents who will cause a few teams problems here.