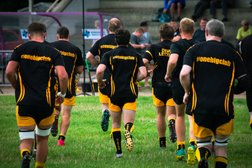 Both sets of coaches will have identified areas to work on ahead of the respective league campaigns and, while the Cockles ultimately came out on top as far as the score board was concerned, we can take a great deal of positives from our performance.
Receiving the first kick off, Exmouth looked keen to play with ball in hand. Our defense was well organised though and forced an error leading to the game’s first scrum. It’s fair to say we were at a size disadvantage up front but that was not evident from the way we got the scrum moving forward.
Indeed, the set piece was solid all afternoon, apart from the first lineout, which was stolen by the Exmouth pack. This turnover, plus a few missed tackles led to their first try, which was converted for a 7 v 0 lead.
An unconverted try followed 10 minutes later when, on our own line and seemingly having things under control, the ball went loose for Exmouth to pounce. 12 v 0.

Exmouth had the better of the opening 20 in terms of territory but there were signs that we could be dangerous in attack and that we ought to have enough ball to show it.

Around the 25-minute mark we put together some decent phases as play advanced into the Exmouth ‘22’. Unfortunately, a loose pass resulted in a loss of possession. 5 minutes later we won a scrum penalty and quick ball from the subsequent lineout gave the backline a chance to open up. Some good handling put Tyler Farley into space and he finished off well with a try under the posts. The conversion was somehow missed, and it was 12 v 5.

With half time approaching we worked hard to get ourselves in a good attacking position on the Exmouth line. The Cockles gave away multiple penalties but, in the end, their defence forced a knock on and, in the blink of an eye, Exmouth went in under our posts for a converted score to make it 19 v 5 at half time.

We started the second half strongly, continuing to apply pressure in the Exmouth ‘22’ but were unable to convert the territory and possession into any points. Two more Exmouth tries leading up to the end of the third quarter made it 31 v 5.

The final quarter again saw us spend time in the Exmouth half and, after conceding a few more penalties, the referee reached for his pocket, picked out the yellow card and Exmouth were a man down.

A good lineout catch and drive ended with Nathan Karea dotting down. With Josh Davey converting it was 31 v 12.

It didn’t take long for Exmouth to respond and with what was probably only their third visit of the second half into our ‘22’ they scored their third try of the period which was converted to make it 38 v 12.

With just a few minutes of the game remaining, Exmouth held onto the ball and rounded things off with one more converted try. Final score 45 v 12.

Overall the players and coaches should be very pleased with their afternoon. We matched our hosts physically and created chances. The attitude was awesome, the commitment was champion and it was nice to see some new faces in the #blackandamber.

Thanks to Exmouth for being great hosts, you had a bit more firepower, were more clinical and showed us how to finish – good luck for the season ahead.
#kirton #onebigclub