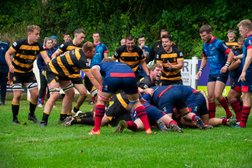 With four wins from four games, Devonport would undoubtedly have been favourites in this game and the way the game started, it is unlikely that anyone would have disagreed.

With four wins from four games, Devonport would undoubtedly have been favourites in this game and the way the game started, it is unlikely that anyone would have disagreed. Right from the kick off they set up an attack and whilst that was thwarted by some solid defending, it took just four minutes for the scoreboard to start moving when a free flowing move ended with a try more or less under the posts for scrum half Dylan Daley. The conversion was something of a formality which Richard Goldsby-West landed with ease and the home crowd could be forgiven for anticipating a long hard afternoon ahead.

Rather like a boxer who had taken a few blows to the head, the Crediton players simply shook off that bad start and began to take the game to the visitors. However, their defence was in no mood to yield and although we managed a couple of half breaks, we were shut down pretty well. Devonport always looked dangerous when attacking from depth but our defence also remained pretty solid as the game took on a tit-for-tat attack-defend routine.

Ollie Avery-Wright landed a penalty in the tenth minute to reduce the arrears and thereon the game was something of a stalemate with defences on top. Certainly, we were having the better of things at the scrum as the visiting front row looked anything but comfortable but neither side could create sufficient openings to find a way through.

Things burst into life in the 33rd minute when a superb handling move took play from the left on half way, fullback Josh Davey came into the line at pace and managed a superb offload to winger Josh Woodland who did the rest in the corner. The conversion drifted wide but nonetheless we went to the interval with what might have been considered an unexpected one point lead.

The second half started with our boys controlling territory and possession but, somewhat against the run of play, on the hour mark we found ourselves in arrears once again when a driving maul became impossible to defend and visiting skipper Matt Gregory touched down, the conversion by Goldsby-West put the visitors ahead 14-8. Goldsby-West and Avery-Wright traded penalties for 17-11 to Devonport going into the final quarter.

We threatened several times as we ran at the defence with Ross Toms prominent but our inability to finish things off looked to be a major problem. The visitors withstood the pressure and looked threatening with ball in hand but as has been the common theme throughout, defences held firm.

Devonport were beginning to be visibly frustrated and incurred the wrath of the referee with some ill-disciplined play although both sides did have players in the sin-bin. However, we learned from our mistakes whereas Devonport did not and with time running out, a penalty fifteen metres out was disputed by the visitors who were promptly marched back a further ten metres. A quick penalty and lock Luke Mingo was driven over the line. We were of course still a point behind with a difficult conversion from the touchline to come. Avery-Wright landed superbly and we were ahead by a single point.

More drama followed when we were awarded a penalty just inside our own half and in an effort to run the clock down, we opted for the kick at goal. Avery-Wright’s effort was short and the visitors set up a counter attack which ended with a penalty to them on half way. They had three options, a kick for goal to win the game, a kick for touch and have the benefit of a lineout deep in our territory with still an opportunity to score a try, or, as they decided, to run and create an attacking platform. A simple decision made difficult by the option, the ball was knocked on and we had a scrum and the ball put into touch.

For the second half performance in particular we deserved the victory, having dominated territory and had we been a little more clinical the margin of victory could have been greater. Whilst the entire team deserve the accolades, mention must be made of skipper Henry Gavin who led by example, made several carries and always gained ground and tackled like a man possessed. Newcomer Fenton Davies came in at scrum half for the injured Ed Brady and had an excellent game and overall there is huge pride in the performance. A result that will indeed make people take notice and proves we are a force to be reckoned with.