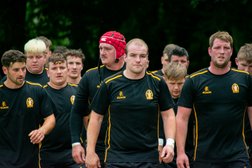 It has been such a long wait to watch the 1st XV play a home league game but the players ensured that the wait was worthwhile with a solid performance against Bridgwater.

It has been such a long wait to watch the 1st XV play a home league game but the players ensured that the wait was worthwhile with a solid performance against Bridgwater. A couple of home defeats had left Bridgwater struggling at the foot of the table but they had a few players returning and fielded their strongest side to date.
It was great to have our main sponsors with us for the day and before kick off we paid our respects and remembered those members who have sadly passed away since we last had a league fixture.
The opening few minutes of the game saw the visitors begin to dominate possession and territory but, as in the previous game at Thornbury, our defence was in fine form. We did take the lead on eight minutes when a strong tackle in the centre saw the attempted pass intercepted by winger Josh Woodland who raced 45 metres to touch down, Ollie Avery-Wright adding the extras.
Within minutes, a series of driving mauls led to a penalty 5 metres off the Bridgwater line, this was quickly taken by Luke Mingo who was driven over for a try, again Avery-Wright landed the conversion.
Bridgwater were stirred into action and a good break by their centre Oskar White created the opportunity for veteran lock, Wayne Sprangle to crash over. Both sides were keen to play a passing game and with three tries in the opening fifteen minutes, a try fest looked a distinct possibility. However, it was defences that took centre stage with neither side creating scoring opportunities.
Our lead was increased on the half hour when the visitors were penalised for not rolling away at the tackle and Avery-Wright had no difficulty in adding the three points.
Any hopes that we would begin to pull away were soon knocked back when shortly before the interval, we conceded a penalty and Bridgwater decided to go for a lineout. Their adventurous decision was rewarded when hooker Gavin Knight was driven over, fly Stuart Heal landed the conversion to bring them within five points at the interval.
The second half began with the visitors in confident mood, buoyed by their second try they seemed to have the momentum with them and when we were penalised for handling in a ruck, the points difference was narrowed to two as Heal landed a simple penalty on 50 minutes.
We certainly needed to reassert some authority on the game and pressure in the visitors half produced penalties in the 55th and 65th minutes, both of which Avery-Wright converted and once more we had a two-score lead.
We continued to press home the advantage that we had gained in the scrum and the tiring Bridgwater pack began to struggle, conceding penalties and from one, a quick tap took us to the line and eventually, replacement back row forward Chris Hooper went over in the corner, Avery-Wright was only a fraction wide with the difficult conversion.
With a thirteen-point lead, we began to play with a little more freedom and the bonus point try came along in fine style. A long clearance kick was safely gathered on our ten-metre line just in from the touchline and the ball fed inside to Avery-Wright who made twenty yards before offloading a perfectly timed pass to centre Dan Yendell whose pace took him to the Bridgwater ‘22’ before another neat pass to Woodland who did the rest and with Avery-Wright landing the extras, we were home and dry.
Well played lads, an enjoyable game and entertaining evening
#kirton #blackandamber #onebigclub
Share via
FacebookTwitter
https://www.pitchero.com/clubs
Recent news