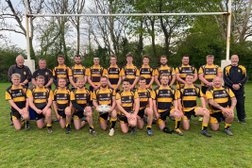 Experience was just enough to hold the youngsters to a draw.

An entertaining game between the youngsters versus the experience was a good way of running off some of the Christmas food, it would have been drink were it not for the early consumption of Port to warm the muscles.
The game started at a frantic pace with the elders playing up the slope and looking after possession when they managed to work an overlap for the speedster winger Steve Boatfield to show his pace for the first score, this surprised the youngones who suddenly realised it wasn’t going to be a walk in the park.
The youngsters came back into the game as the slope took it’s toll and a couple of errors let them in for some easy scores.
The second half started keenly with more keenly contested possession on the floor and some usual Devonshire refereeing from Mr Trick not picking up on the wise old tactics from the experienced side, this frustrated the youngsters who continued to try and take them on at the power game rather than using a more loose and quicker game.
The try of the day was started on the oldies own goal line when everyone thought the wise old Mr Howard was going to kick he stepped and ran putting away a couple of players with a couple of more phases going down the pitch a breakaway try was scored.
The game was going from end to end with the score at 26 -19 to the youngones, Chris Hooper managed to finish off a move and convert with a drop kick to level the scores, the oldies tales were up for a final flourish which was held up just short of line and Mr Trick decided he needed some refuelling so the final score was a 26 all draw.
Share via
FacebookTwitter
https://www.pitchero.com/clubs
Recent news