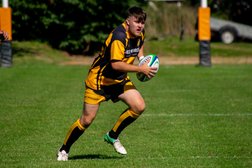 Perfect blend of youth and experience shines through.

A lovely sunny day and what could be better than a trip to the seaside for a game of open running rugby. Ask any front row forward and they would say it is something to look forward to but maybe with the exception of the words open and running!

This was a perfect blend of youth and experience and once the youngsters had learned the language of the older guys (and vice versa), the communication improved as did the performance. We started up the slope but it was the home side that took the initiative and were the first to score with a converted try. However, we began to dominate the scrums and and apply pressure and with some good possession set the backs on their way. We reached the interval all square at 12 points apiece but with the slope to our advantage, the players felt that they could win.

Making full use of the slope, possession and territory, the 3rds ran in three more tries, two converted whilst Withycombe replied with one of their own. It was an entertaining game all round with both sides contributing and played in a tremendous spirit .

Of course the forwards will inevitably decide how the game is played and it is probably no surprise that it was they who grabbed the scoring glory, veteran prop Kevin Ellis (who started playing when a try was worth only three points!) ran fully three metres for his two tries, lock forward Callum Anthony grabbed one as did flanker Matt Arnold. Strong running Scott Mills was the only back to score other than centre Tom Ronchetti who landed three conversions.