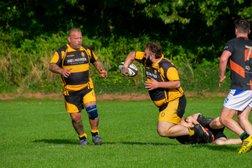 As the final whistle blew on this Devon Merit Table 2NE fixture it was the pace, fitness and organisation of the students that won the day but the spirit, attitude and commitment of our 3s also shone through in spades.

Our visitors started strongly and dominated territory for the opening 10 minutes, although possession was 50/50 as both sides were managing to turn the ball over frequently. We were struggling to get out of our own third though and paid the price when, despite a scrappy lineout, the Engineers managed to get the ball across the backline to score out wide.

Almost immediately we were hit again after a kick through was chased down for a second unconverted score and, soon after, the students were in again under the posts and we found ourselves 0 v 17 down after quarter of an hour.

These early scores were quite a setback, but we started to get into the game. Our scrum was looking strong and, when we kept the ball tight, we were able to make good ground. Jamie Acton, playing only his second game in the back row, carried well and Jack Reed (one of three Reed’s on the pitch!) was working hard in the loose.

When we looked to go a little wider, Brad Baker and Kieran Jones did their best to give us some go forward but the visitor’s backline was proving hard to penetrate.

Despite this decent spell, we couldn’t get into a scoring position and on 35 minutes the visitors extended their lead to 0 v 24 before, on the stroke of half time, they went further ahead 0 v 31.

Unfortunately, the second half started in similar fashion and an early converted try from Engineers took it to 0 v 38. Again, we were stirred into life and after some good pressure from the pack Wayne Reed powered over for a try which Hayden Hill converted to make it 7 v 38.

For the next twenty minutes, the game was a real tussle. Our strength was keeping the game tight while the students were more comfortable throwing the ball wider. Replacements Pete Rich and Ashley Bradnock were coming to the fore, taking the game to the opposition and getting us on the front foot.

However, it was the visitors who scored next, extending their lead to 7 v 43 and then again to 7 v 50. We may have been down but we certainly had more to give and with five minutes remaining Jack Reed burst through to score. Ryan Styles converted and it was 14 v 50. The last word though went to the Engineers who rounded off their afternoon with a final converted try. Full time 14 v 57.

Congratulations to the Engineers on their performance and the win. We suspect you will have a decent season!
A huge shout out to our lads too. You never gave up. Your attitude was awesome. Your commitment was champion.