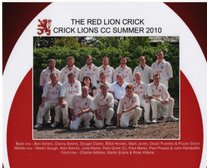 The Three Certainties in Life: Death, Taxes and Crick Collapses

Bank holiday weekend, and the usual holidays, injuries, child-care issues and international call-ups that plague the Crick Lions squad at this time of year came back around to bite us this week. A Grant-less Crick XI (when was the last time that happened?) was nevertheless bolstered by the appearance of father-son duo Russ and Max Robinson (thank you chaps).

As is tradition against Badby, the game was 30 overs per-side, retire at 30 and come back in at the end. Badby’s top order wasted no time in getting off to a blistering start to their batting innings, with both openers playing some cultured cricketing strokes, in contrast to the rest of their top 5 who agriculturally flayed Crick’s attack to all parts (but mostly cow corner). The first wicket eventually came off the bowling of Mike Rodley (6-0-50-1), through a cool catch taken by Dave Allen. Charlie Gibbins (6-0-26-2) opened the bowling from the other end, but despite his usual accuracy, couldn’t make the breakthrough in his first spell, clean bowling both victims in his second spell. Dave (6-0-31-1) came on first change, finally bowling their number 3 batsman in his penultimate over. So eager was Dave to take wickets that he appealed for virtually anything that hit the pads (and bat), to the embarrassment of his teammates. Bobby Brooke (6-1-25-0) bowled well to achieve the only maiden over of the innings but will be rather frustrated with himself for dropping a catch off his own bowling. Not even an in-form Bomber (5-0-42-2) could stem the flow of runs, although he did miraculously bowl their number 8 up the slope, however the ball was travelling so slowly that it, and indeed time itself, must have been going backwards by the time it reached the stumps. In an athletic display of fielding, Bomber was all too keen to drop on the ball as if it were a hand grenade off his own bowling (why don’t you do that when the rest of us are bowling?!).
Speaking of fielding, history was made at the CCG today when Mark ‘safe as houses’ Jones dropped a hard catch that was travelling at some speed, straight into his midriff at square leg off Bomber’s bowling. In a panic to blame something on the drop, Mark rolled around on the floor ‘in pain’ as if he were an Italian footballer blown over in the breeze trying to win a free kick. After the stretcher was brought on, the paramedics had attended, and a head injury assessment was completed, it was concluded that a minor bruise had appeared on his stomach. It’s fair to say that none of his mutinous players offered their skipper any sympathy, and in no time at all, Mark was back up on his feet, prancing around the field like a new-born lamb in spring.
Once we got into Badby’s soft underbelly, the run rate rapidly decreased and their less-capable batsmen, to put it diplomatically, occupied the crease. Our problem now was that we started to take wickets (what were we thinking?). Mike apologetically took a catch off Bomber’s bowling, but Bobby was the main wicket-taking culprit, with his superb long-range throw running out their last man at the non-striker’s end, paving the way for their retired opener to come back in and continue bludgeoning us for another 30 runs, retiring for the second time, on 62 to a widely dispersed field (why can’t you save those throws for when we actually need them, Bobby?!). In a merciless display of hitting, Badby racked up an imposing 191 off 30 overs.

In an inspired move, Crick’s specialist T30 opening batsmen Charlie (29) and Bobby (11) were sent out by the skipper to get the Lions off to a whirlwind start in the chase. They did just that, meaning Paul Preece was left in stunned silence as his usual cries of “It’s not a test match” simply weren’t applicable to Crick’s free-flowing run rate. Dave (15) came in and kept the score ticking along with Charlie, whilst Mark (23) punished the slow bowling to all areas of the CCG, including a patch of deep stinging nettles, and was dropped on the boundary trying to launch the ball into the canal. You can tell he’s enjoying himself out in the middle when he holds the pose, looks deadly serious and chews gum incessantly. His serious looks turned into deadly daggers when Dave, umpiring at square leg, reluctantly gave him out after a throw from the keeper reached the stumps before Mark could ground his bat. It wasn’t made easier by the fact that the ball bounced probably three times by the time the keeper collected it. Some would say Mark should have hit it, others would say that Dave needs to brush up on the rules.
This wicket sparked a mini collapse when Russ (2) was bowled trying to send a straight one into orbit, young Max (3) was extremely unlucky when he kept backing off to a slow ball, whilst the ball chased him and cramped him for room, forcing him to destroy the stumps with his bat. Steve Exton (4) dollied one back to the bowler, as did Mike (13), who has a tendency to get out caught and bowled this season, probably because he feels sorry for hitting bowlers for so many 4s (bowlers’ union stuff). This brought the usual opening duo of Bomber (9) and Rocky (11*) to the crease, which saw a late-order rally, but was unfortunately not enough to see us home. Marcus Wilson (1) was the last wicket to fall, avoiding the dreaded duck at the end, and Crick were all out for 149 in the final over. To score this many runs off 30 overs was a great effort by the team, well above our usual run rate.

In a game which had more retirees than an old people’s home, in which a bloke called ‘hill billy Pete’ was their player of the match for taking 4 wickets, including 3 catches, (“I don’t do this every week”, he assured us), it’s safe to say that the Lions’ pride was more than hurt. However, the game was played in great spirit, as is always the case with Badby, and both sides stayed for a post-match beverage or two after.

On a separate note, after the game, the club raised a record-breaking £225 at the first quiz to be held in the Red Lion since the start of the pandemic. The money will go to a great cause, as always. Most of it will be put on black at our end of season trip to the casino… erm, sorry, I mean it will be well spent on ground maintenance work. The Lions don’t have a game next weekend, instead we will be running the bar at Crick’s Music Festival, so all are welcome to have a drink with us and support a local cause.