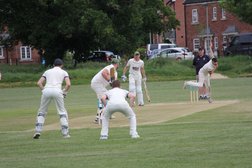 Cricklade continued their so far relatively untroubled path through GCCL Division 6 with another straightforward win against fellow promotees Hardwicke on Saturday which sees them consolidate their position at the head of the table.
Having lost the toss, Cricklade were asked to bat first and, for a change, found themselves in some early difficulties. Openers Pagy and Danny fell quickly and were soon followed by Rhys Mills (again failing to grasp the concept of patience) leaving Cricklade in some trouble on 36 for 3.
Fortunately, by this time Greg Davies had bothered to turn up and proceeded to show what great form he’s in with the bat, scoring an excellent 69 at more than a run a ball, playing excellent cricket shots on a wicket that was not easy to bat on. With Paul Dewsbury (28) providing good support, the pair put on 100 for the 4th wicket before Reggie’s pathological fear of the seventies got the better of him and he missed a thigh-high full toss from a pie chucker. Regular readers will understand that he was not best pleased with this outcome and, although he did manage to retain a modicum of composure, this didn’t stop him throwing his bat 40 yards.
Thankfully the good work was continued by AP McGrath (25) demonstrating again that hockey shots can translate to cricket, and a very elegant and timely innings of 57 not out by James Barton, making his first appearance of the season, which took Cricklade to a good total of 241 for 6 off their 45 overs.
Once again, Cricklade’s turn with the ball started with early wickets, initiated by Adam Robbins and taken up by Reg Davies bowling fast and surprisingly straight for once, picking up 4 for 17 off his 7 overs, all bowled.
Some late order resistance was ended by the Sensei (2 for 4) and the innings was closed out by Jack Danford picking up 2 for 15, leaving Hardwicke all out for 113 and Cricklade victors by 128 runs.
This week’s Big Van World Man of the Match was James Barton for his excellent batting and economical but unlucky bowling.
Cricklade now lead the table by 8 points from Kingsholm, ahead of this week’s visit by Stroud 2nds, who sit in mid-table. Let’s hope for a more competitive game of cricket.
Share via
FacebookTwitter
https://www.pitchero.com/clubs
Recent news