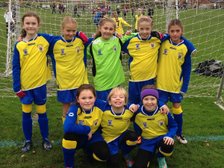 Girls turn on the style

Following a nervy week for the coaches with training being cancelled this week the girls turned up on Saturday with one thing in mind..To make up for lost time!!

The team was much changed to last weeks line up with both Katie Richardson and Elle Whittaker both missing from the match day squad leaving a starting line up of Jessie Byers, Mia Bates, Cheyenne Rimmer, Katie Atkinson (C) Scarlet Campbell. Millie Perry and Megan Parker. Subs were Fiona Dennett and Jess Longton.

The girls started steadily creating a few chances before Megan parker found her shooting boots and slotted the first of her 4 goals, the game was all but settled after 10 mins with another 1 from Meg either side of Millie Perrys opener.

Spurred on by a bumper ground that included a couple of Crosfield's coaches the girls started to fizz the ball around with the goal of the game coming from a Goal kick played out by Jessie Byers to Jess Longton who knocked it to Katie Atkinson who played in Mille Perry down the right hand touch line, the ball was then squared to Megan Parker on the pen spot who calmly finished first time leaving the keeper no chance.

Wave after wave of crosfields attacks did nothing to dampen the spirits of the Frodsham girls who continued to pass the ball and look for the opening, that eventually arrived 2 mins after Jess Longton sent in a blockbuster of a right foot that flew into the bottom corner like an arrow rounding off the crosfields scoring.

A great victory in want was a pleasing performance with Katie Atkinson being voted Man of the Match for her non stop running and Six assists.