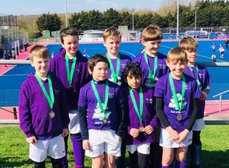 Patience you must have my young Padawans
Jo Everett

Sunday saw the U10B play in their last tournament of the season. With the spring sunshine finally arriving the boys rose to the occasion to give their best performances of the season in the Essex mini league hosted by Old Loughtonians.

Results on the day were as follows:

The results meant the boys placed third in the tournament and were pipped down to fourth for the season across all the tournaments. Fantastic results as the boys just keep on improving with every competitive game from where they started.

Big thanks to Coach Suzy Haven and Jo Everett; not to forget the cast of umpires, supporters and parents helping out every weekend. See you next season!