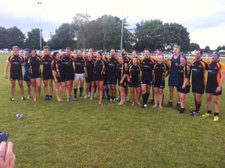 Crowthorne Rugby Has a Good Day Out in Caversham

The ladies lead by Holly Bentley navigated the pool stage with wins against Reading and Urban Chox, to receive a bye at the quarter final stage setting up a semi final against Chelmsford. Running out convincing 25-5 winners set the ladies a final clash against the formidable Worchester ladies side. Strongly fancied for a reason Worchester ran out 30-0 winners to claim the cup.

Crowthorne’s men were able to go one better after three wins against Staines, Stade and Beconsfield but narrowly losing to Reading. The Crows topped their pool on points difference enabling them to advance to a semi final against Readingensians. At the business end of the cup competition the boys had to dig deep to come back from two tries down to beat a resilient Ensians side. Playing true 7s rugby (with a couple of beers inside them) the Crows opponents in the final, Marlow had looked in formidable form as they had swept aside all before them on their way to the final. It came down to a last gasp try from Dougie Charman to secure the win and the tournament trophy, the first for Crowthorne Rugby Club.

If you are interested getting involved in rugby in any way or would like to improve your fitness come along to the Crows Nest, Cricket Field Grove, Crowthorne. RG45 7ES, at 7-9 pm Tue and Thu and join in training with the squads. All levels of experience and knowledge are welcome.