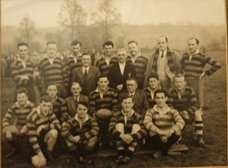 Club History
The Club was formed in 1892 and played on thirteen different grounds in and around the town before Stafford Park was purchased in 1980. The funds were supplied by the Cullompton Rugby Football Supporters Club which had been founded in 1969 when a Clubhouse was acquired at 52/54 Fore Street with the intention or 'encouraging and supporting the playing of Rugby Football in Cullompton'.

When the Clubhouse was sold the existing on field Clubhouse was constructed and opened on 6 December 1988. The Supporters Club merged with the Playing Club in May 2003.

The playing club and supporter base has been enlarged in recent seasons with ladies, veterans and a thriving junior section.

The excellent social facilities and a sound financial base will provide players of both sexes and all ages with opportunities to play Rugby Football.