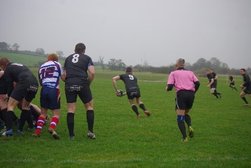 With both teams failing to inflict any damage by half time in this BT West League 2 fixture at Auchenkilns, perhaps a more telling score-line was the penalty count, with Cumbernauld conceding 15 penalties to Strathendrick’s 5. While there was widespread touchline mutterings about refereeing inconsistencies, the conclusion has to be drawn that the home team were doing something wrong. Too often Cumbernauld were penalised in the loose for not releasing in the tackle or coming in from the wrong side at the ruck and the old maxim remains true – if you don’t retain the ball, you are not going to score points. To this observer, so much of what went wrong can be traced back to individual players’ training records. Cumbernauld coaches reported that 6 attended training on Tuesday with 7 showing on Thursday. As a result players are unfamiliar with their own team-mates tendencies and the various plays being inculcated into our playing style by the coaches. What inevitably follows is wrong choices made at the breakdown with the end result being turned-over ball or a penalisation. Sooner or later we have to change this feature of our play or pay the consequences and look forward to mid-table mediocracy. One idea being muted by club coaches is one, mandatory training session and one voluntary training session and players would have to commit to the mandatory session if they want to be considered for team selection.

That said, there wasn’t a great deal to report on in the first half as Strathendrick started the stronger team. Cumbernuald slowly rallied with Ian Hepburn, JJ McNair and Kevin McTier notable in the loose. After 25 minutes of play Cumbernauld had a great opportunity of scoring when great driving play from the forwards delivered a scrum in the visitors’ 22 metres area. Unfortunatley poor passing between Cumbernauld’s midfield players resulted in Strathendrick booting clear to set up their own incursion deep into Cumbernauld territory. The nearest Cumbernauld came to scoring in a turgid first half was a penalty following a scrum infraction which carried wide.

Cumbernauld managed to strike first in the second half, with Jordan Reid confidently slotting a penalty. However Strathendrick quickly countered with a penalty to level the scores but Cumbernauld were unlucky not to take the lead with 3 missed penalties, when on at least one occasion, a kick to touch deep in opposition territory might have been the better option. Again Cumbernauld were unlucky not to score in the corner but the Strathendrick defence managed to ground the ball and from the ensuing quickly-taken 22 dropout, established considerable territorial advantage when brave play from Jordan Reid, Anthony Rice and Daniel Prinn, saved the day. This advantage gave Strathendrick the opportunity to kick another penalty late in the game leaving it too late for Cumbernauld to counter. The post-match review clearly highlighted the penalty count against Cumbernauld but it was agreed that while the effort overall was commendable, especially in the second half, our playing structures need refinement and only a greater resolve to improve training attendance will remedy these short-comings. For the second week in a row, Cumbernauld had lost a game they could have won and hopefully next week’s fixture away to Paisley will give the Badgers the opportunity to return to winning ways.