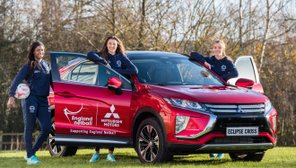 Mitsubishi Motors in the UK is backing one of the country’s most popular and fastest-growing sports with the announcement of a brand new partnership with England Netball.

The exciting new development sees the brand become an official partner of England Netball – the national governing body of what is England’s biggest female team sport.

The partnership establishes Mitsubishi Motors as the official vehicle supplier to England Netball and the brand’s logo will also feature prominently on the Elite Squad’s uniforms and warm-up kits, as well as on the coaches’ kits.

Mitsubishi Motors’ support of England Netball builds on its successful national partnerships with England Rugby and Scottish Rugby, and with the Mitsubishi Motors Badminton Horse Trials. Importantly, and as it has demonstrated with its commitment to rugby and equestrianism, its backing extends all the way from top-flight to grassroots level of the sport.

Plans are in place for the brand to assist England Netball with a variety of projects to support the growth and development of the sport across the country, while England Netball will also be provided with a fleet of Mitsubishi vehicles, including the award-winning Outlander petrol/electric PHEV, for their regional staff.

The partnership comes at an exciting time for both England Netball and Mitsubishi Motors. The sporting organisation celebrated its 90th anniversary in 2016 and is at the forefront of netball’s increasing popularity with over 92,000 affiliated members and at least a 1.4 million women playing the game each week.

There has also been fantastic success for the England Roses as they secured a pair of wins over New Zealand in the summer before winning the Fast5 Netball World Series in Melbourne. With the 2018 Commonwealth Games on the horizon in April, the focus is firmly on England continuing this momentum and making the podium.

Meanwhile, the manufacturer is getting set to launch two all-new SUV models in early 2018 – the Mitsubishi Eclipse Cross and Mitsubishi Shogun Sport.

Joanna Adams, CEO, England Netball, said: “We are delighted to join forces with such an established, respected and ambitious partner in Mitsubishi. They have a proven record in positively influencing sport at all levels in this country and Mitsubishi will allow England Netball to continue increasing the popularity and reach of our sport.”

Lance Bradley, Managing Director of Mitsubishi Motors in the UK, said: “We’re delighted to become an official partner of England Netball. Like our brand, the organisation has a long, successful history and is forward thinking in its approach to reaching its goals.

Importantly, and as we have enjoyed with our support of rugby and equestrianism, we are very much looking forward to having an impact at all levels of the game and partnering England Netball as it inspires more and more women and girls of all ages to take part in the sport.”