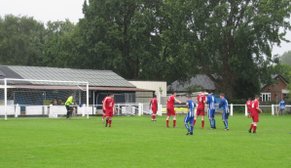 A terrific comeback from Daisy Hill saw them pick up their second successive home win, overcoming the loss of goalkeeper Dean Williams to eventually win 2-1 against St Helens Town.

A great second half comeback from Daisy Hill saw them emerge with a fine 2-1 win over St Helens Town, after playing with ten men for almost an hour.

Goalkeeper Dean Williams was shown a red card in the 37th minute, after the referee ruled he had denied a clear goalscoring opportunity with a challenge on Town's Onuh Morgan.

The resultant spot kick was converted by Jordan Jones, but a tremendous second half comeback saw Daisy claim all three points with goals from Jake O'Brien and Jacob Ridings.

Daisy made a good positive start to the game, and enjoyed plenty of pressure, with the pick of the early chances falling to Dean Singleton, who sent a glancing header just wide of the far post from a right wing cross.

It took until the midway point of the first half for St Helens to threaten, with left back Jesse Robinson showing good pace down the left before cutting inside and firing across the face of goal.

But on 27 minutes, a terrific flowing move from Daisy almost led to the opening goal, with Dexter Brierley sending David Devlin free down the left, and his first time cross was met on the volley by Jacob Ridings, but his shot missed the target by a couple of yards.

Ridings was involved in the game's major talking point in the 37th minute, when his back pass to goalkeeper Dean Williams led to the keeper trying to dribble the ball past St Helens forward Onuh Morgan.

The St Helens man intercepted and in the chase for goal, he and Williams collided and both hit the ground. The referee awarded a penalty and showed Williams a red card for denying what the official saw as a clear goalscoring opportunity.

A lengthy delay ensued as substitute goalkeeper Craig Haynes got ready to join the action as a substitute, with David Devlin sacrificed to make way.

Haynes took his place between the sticks to face the penalty from Jordan Jones and although he guessed correctly where the striker placed his kick down to his right, the ball had enough pace on it to squirm under his body and into the net to give Town the lead.

Straight from the kick off, Daisy immediately launched an attack and Hensley Mills outpaced the Town backline to get a shot in on goal but the ball hit the side netting.

Daisy ended the half on the front foot, with Jake O'Brien firing in two long range efforts in the closing five minutes that weren't far off the mark.

After the break the pace dropped in the opening 15 minutes, with the sole clear cut chance falling to St Helens Town, when Neil Weaver spotted Craig Haynes off his line and fired in a looping shot over the keeper that hit the crossbar.

But Daisy kept plugging away and got their reward with 20 minutes remaining.

Hensley Mills was fouled over the far side corner flag, and when Jake O'Brien curled the free kick in towards the near post, Town keeper Carl
Williams desperately tried to claw the ball away to safety but it ended up in the back of the net.

It got even better for Daisy with 14 minutes remaining, when they struck again with proved to be the decisive goal.

A great ball from deep sent Hensley Mills free down the left, and he cut inside to lay the ball back into the path of Jacob Ridings, who saw his first blocked but he followed up to steer the ball in off the far post.

Inevitably, St Helens staged a late fightback that led to some nervous moments in the home defence, most notably in the dying seconds when a neat through ball played St Helens midfielder Neil Weaver in on goal, but Craig Haynes denied him with a fine blocking save.

Moments later, the final whistle blew and the celebrations in the home camp began.