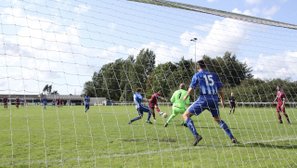 Two up at the break, Emley took control with a third goal early in the second half before Jacob Ridings pulled a goal back with just under 20 minutes remaining.

But a fourth goal for Emley snuffed out any hopes of a Daisy revival three minutes from time, although Jamie Ramwell reduced the arrears in stoppage time.

Daisy began well and were unlucky not to take the lead in the fifth minute when Dean Singleton's header from Danny Warburton's corner was cleared off the line.

But it was the visitors who opened the scoring on 11 minutes when James Eyles seized on a short pass back to round Craig Haynes and roll the ball into the net.

It got worse for Daisy ten minutes later when Emley doubled their lead.

James Eyles reacted quickly to a misplaced clearance landing at his feet and attempted to lob the ball over Haynes from 25 yards, but the keeper managed to claw the ball round the post and concede a corner.

When the kick came into the box, Scot Winstanley was adjudged to have taken the man rather than the ball in a challenge, and the referee pointed to the spot.

Rob Bordman drilled the spot kick down the centre of the goal to put Emley 2-0 ahead, and just after the half hour Bordman had the chance to face Craig Haynes from the spot once again when Emley were awarded another penalty after a push on Ben Walker by Jordan Hussey.

But this time Haynes won the battle, diving low to his right to push away Bordman's shot to safety.

Daisy hit back, and after a good run down the left from Peter Lancaster was met by a good shot by Jamie Ramwell that produced a smart save from Emley keeper George Clarke, Dean Singleton then tested the keeper with a shot in first half stoppage time.

Hopes of an early Daisy revival were pretty much snuffed out nine minutes in to the second half when Emley went 3-0 ahead, Joshua Ingham having time and space to fire home after a clearing punch from Craig Haynes had landed at his feet.

But Daisy continued to push forward and got their reward 19 minutes from time, when good chasing from Jamie Ramwell won him the ball wide on the right, and he cut inside and laid the ball into the path of Jacob Ridings who tucked away his second goal in successive games.

Three minutes from time, Emley restored their three goal lead when the Daisy defence were caught out by a long ball forward, and Eyles beat the offside to advance towards goal, round Haynes and roll the ball into the net for his second goal of the afternoon.

But Daisy kept pushing and claimed their second goal of the afternoon as the game moved into stoppage time, when Jamie Ramwell rifled home after Macauley Farrington's storming run down the right.

Ramwell almost claimed his second of the afternoon moments later in the last action of the game, when he got on the end of a Jacob Ridings cross in to the box, but his shot was well saved at point blank range by Emley keeper Clarke.

The photo at the top of the page shows Emley’s Connor Glavin shooting for goal but Daisy Hill’s Adam O’Donnell clears off the goal line. Photo courtesy of Mark Parsons.