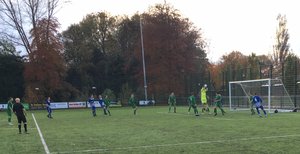 Daisy hit for five at Pilkington

Daisy Hill's first ever meeting with Pilkington ended in a 5-1 defeat at the Arcoframe Stadium in St Helens.

A second half collapse put paid to Daisy Hill's hopes of bagging back to back away league wins.

An evenly matched first half ended with Daisy being slightly unlucky to be 2-1 behind, but the hosts took control in the second half, and in the end ran out comfortable winners.

Pilkington began on the front foot and created the first chance of the game in the 4th minute, with captain Luke Sephton just missing the target when he connected with a left wing cross.

A minute later, Daisy had another narrow escape when keeper Sajjad Sulaman made a fine double save before the ball fell to Ben Maddocks who blasted a shot against the post.

It took until the midway point of the half for Daisy to enjoy some possession and create some chances, the best of those a Jake O'Brien shot that was well saved by Pilkington keeper Bobby Jones.

After Callum Laird outpaced the Daisy defence to fire a shot just wide of the post, Daisy came close when a sweeping move started by Sulaman led to Jacob Ridings firing a cross into the box that just failed to find Jamie Ramwell.

Hensley Mills combined neatly with Jamie Ramwell to create Daisy's next chance that ended with a shot into the side netting, but it was the home side that finally broke deadlock in the 29th minute.

Pilkington full back Paul Meadows delivered a measured cross into the box, and Ben Maddocks got in front of the covering defender to side foot home from close range.

But Daisy hit back and after Hensley Mills tested Jones in the home goal with a 30 yarder that the keeper had to tip over, they drew level eight minutes before half time.

Jamie Ramwell reacted quickly to latch on to a long ball over the top of the Pilkington defence, and the striker advanced in on goal before tucking the ball under the keeper to pull Daisy level.

But a couple of minutes before half time, Pilkington regained the lead with a fine solo goal from Luke Sephton, who picked up a ball in space wide on the right, cut inside and buried a shot in the far corner of the net.

It was an unfortunate end to the first half for Daisy, who had competed well and probably deserved to be at least on level terms on the run of play, but any hopes of a second half revival were soon snuffed out, due in no small way to the introduction of the towering Deklan Hill as a second half substitute for Pilkington.

The substitute soon made his mark on the game, beginning with an assist for his side's third goal when he went on a powerful run down the left before cutting the ball back for Callum Laird for a close range finish that put PIlkington 3-1 ahead just before the hour.

At the midway point in the second half, Hill was then unlucky not to get on the scoresheet when his shot on the turn beat Sulaman but cannoned off the bar.

But the name of Deklan Hill finally made it on the scoresheet 12 minutes from time, when he got on the end of a cross to the far post to send a looping header over Sulaman to push the score on to 4-1.

Hill then rounded off a fine afternoon's work with Pilkington's fifth goal three minutes from time, when he broke down the right after Daisy gave up the ball cheaply in midfield, and from 25 yards out sent a cracking shot across the keeper and into the far corner of the net.